3 billion-liter beer market attracts more foreign breweries
A series of new beer brands have appeared in the domestic market recently. Many brewery groups are planning to jump into Vietnam's promising market with 3 billion liters of beer consumed every year.
Go Back 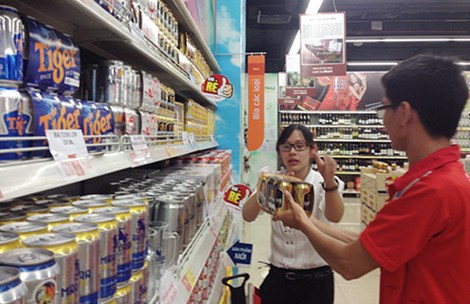 A report from Kantar Worldpanel Vietnam, a market survey firm, showed that an annual two-digit growth rate has been maintained in the Vietnamese market for many years, which is much higher than the six percent growth rate of the fast moving consumer goods (FMCG) market.

More and more beer brands from Belgium and the Netherlands, Mexico and Germany, Italia and Japan, have appeared in Vietnam as the Lunar New Year nears.

Doan Dinh Hoang, a branding expert, noted that Vietnamese tend to drink more and more beer. “Foreign breweries must have realized that the Vietnamese market is very attractive and they have flocked here,” Hoang noted.

This is also the reason why the Japanese partner in Sapporo Vietnam has recently bought 29 percent of Sapporo Vietnam’s stake from Vinataba to become a 100 percent Japanese invested enterprise. Sapporo’s plant in Long An alone puts out 40 million liters of beer a year.

Mikio Masawaki, general director of Sapporo Vietnam, believes that the Vietnamese market is still strongly developing, predicting that the high-end market segment would grow by 70 percent by 2020 instead of 55 percent now.

He thinks that the biggest competition in the beer market next year will be in the high-end segment.

AB InBev, whose name has recently appeared in local newspapers as a party in the AB InBev – SAB Miller merger deal, is running a brewery in Binh Duong province which has the designed capacity of 50 million liters.

Later, they want to exploit the domestic market under their business strategies, and therefore, tend to turn joint ventures into wholly foreign owned companies.

Nguyen Van Viet, chair of the Vietnam Beverage Market, warned that Vietnamese breweries will have a difficult development period ahead as the competition in the market is getting stiffer.

“The luxury tax rate will be raised to 65 percent in 2016-2018 from the current 50 percent, which would bring bigger challenges to Vietnamese breweries,” he warned.