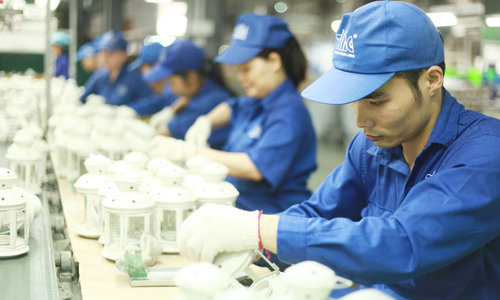 “The performance of foreign invested enterprises (FIEs) continued the positive trends of recent years, albeit some signs of slowdown compared to 2017,” said Dau Anh Tuan, director of VCCI’s Legal Department in a conference releasing the survey on March 28.

FIEs in Vietnam getting smaller

“These high figures show that the spike in activity in 2017 is not just a blip, but also rather a new trend,” Tuan said.

The report suggested many small FIEs are entering Vietnam solely to serve as satellites – suppliers for larger FDI projects.

“Such FIEs may crowd out domestic suppliers and prevent the domestic sector from integrating into global value chains,” Tuan said.

To deal with the problem, the Ministry of Planning and Investment (MPI) has considered imposing minimum requirements on the size of FDI projects.

In terms of sector, manufacturing is the leading foreign-invested sector with 37% of the surveyed, followed by service 27%, construction 6% and agriculture 2%. The shares of FIEs operating in mining and finance/banking/insurance are both miniscule, at 0.13%.

The largest sources of FDI in Vietnam are still the advanced East Asian economies, as South Korea claimed the top spot with 459 firms in 2018, followed by Japan with 408, Taiwan with 183 and China with 96.

Western FIEs in Vietnam remained few and far between, in which 34 are American, 13 French, 14 Australian and 11 British.

Among them, time costs for regulatory compliance have been reduced, informal charges have been significantly lessened, and harassment related to inspections has diminished.

In addition, labor quality, especially high-skilled labor supply, remains the bottleneck in the investment environment in Vietnam, as perceived by foreign invested enterprises.

VCCI survey includes 1,557 foreign enterprises from the 20 provinces and cities with the highest concentration of FIEs.