Agreement supports European firms’ investment in Vietnam signed
A cooperation agreement was signed between the Ministry of Foreign Affairs and the European Chamber of Commerce in Vietnam , aiming to support European investors in Vietnam and promoting Vietnam’s exports to European markets.
Go Back 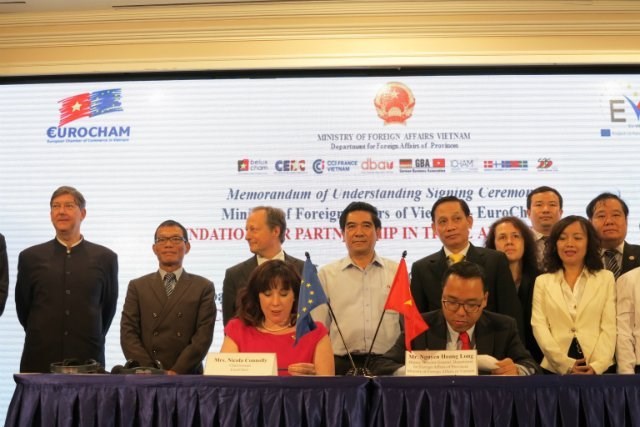 Addressing the signing ceremony in Hanoi on October 26, Deputy Foreign Minister Le Hoai Trung revealed that Vietnam plans to complete negotiations on seven trade agreements in 2015-2016, thus forming a system of 15 trade agreements with over 57 partners worldwide, including 11 strategic partners of the country.

Once completed, the trade deals are expected to open up vast markets for Vietnamese exporters as well as attract foreign investment into the country, he stressed.

The Ministry has established a Department for Local Foreign Affairs, which is responsible for working with localities to remove legal obstacles thus facilitating foreign investment in Vietnam and Vietnamese firms’ exports to foreign market, Trung said.

Many provinces and cities across the country have perfected preferential policies for foreign-invested enterprises, he noted.

Commenting on investment advantages in Vietnam, Head of the European Union Delegation in Vietnam Bruno Angelet affirmed Europe considers Vietnam as one of the 13 strategic and high-advantage markets in Asia.

Vietnam is home to 1,600 projects worth 1.9 billion USD run by over 800 European businesses in a wide range of fields.

Angelet forecasted that EU investments in Vietnam along with trade turnover between Vietnam and Europe are likely to witness a remarkable growth in the coming time as Vietnam and the EU have lifted their ties to an equal and comprehensive partnership and the Vietnam-Europe trade agreement is scheduled to become effective by the end of 2016.

European businesses are interested in financial service, logistics, manufacturing industry and education in Vietnam, he added.