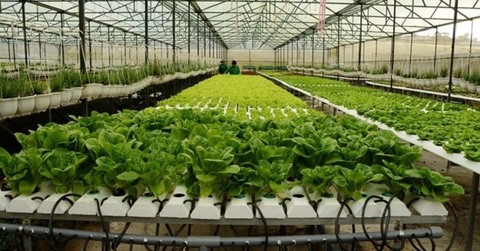 Seafood, fruit and forest products contributed significantly to the sector’s total exports, he said. Meanwhile, the change of rice product structure focusing on exports of high quality and value was one of the initial successes in the restructuring of agricultural production.

Agricultural restructuring had focused on productivity, accumulation of land and promotion of key export products, Son said, besides targeting growth of the gross domestic product (GDP) and export value of the sector.

Pham Cong Thieu, deputy director of the Institute of Animal Husbandry, also agreed that the growth of the agricultural sector showed the positive impact of the restructuring process. The organisation and management of production in agriculture has changed.

Voice of Viet Nam (VOV) quoted Thieu as saying, “The restructuring has focused on producing tree and animal seeds. The sector has invested in production of products such as vegetables, cashew, rice and wood to increase the value for export farming products and attracting more investment in the agriculture sector.”

However, according to Thieu, the agriculture sector is facing many challenges, including stricter trade barriers.

The sector should promote public investment and building of infrastructure for irrigation, transportation and post-harvest processing. It should provide knowledge about increases in productivity, environmental protection and cooperation among research units, enterprises and farmers.

It should develop sustainable management for resources, policies on land accumulation and large production areas. It should create solutions for the negative effects of climate change, because Viet Nam is one of the countries suffering most from climate change, especially in the agriculture sector.

Viet Nam earned about US$29.54 billion from agro, forestry and fishery exports between January and September, up 9.3 per cent from the same period of 2017 and equivalent to 73 per cent of this year’s target, according to the ministry.

Deputy Minister of Agriculture and Rural Development Ha Cong Tuan said although natural disasters had greatly influenced agricultural, forestry and aquacultural production, the sector had fulfilled many targets with results higher than in the previous years, especially in terms of growth and export revenue.

In the reviewed period, agro-forestry-fishery production value grew by 3.81 per cent – 3.82 per cent year on year. Meanwhile, GDP in the sector is estimated to increase by 3.5 per cent – 3.6 per cent.

Major contributors to the expansion are fisheries (up 6.46 per cent), forestry (6 per cent), cultivation (3 per cent) and animal husbandry (2.41 per cent). Surges in value and output were recorded in rice, fruits and vegetables, export poultry meat, tra fish, and timber and wood products.

Tuan said the sector would press on with agricultural restructuring. In October, it would boost the output, value and export turnover of the products with rising demand and good markets to help achieve the targets set for 2018.

Thieu said it would be possible to reach the target of exporting $40 billion of agricultural products this year.

“The total export value in the first nine months exceeded the plan, while the export prospects in the final three months are also good. The US-China trade war will also bring advantages in export for Viet Nam’s agricultural sector,” he said. (VNS)