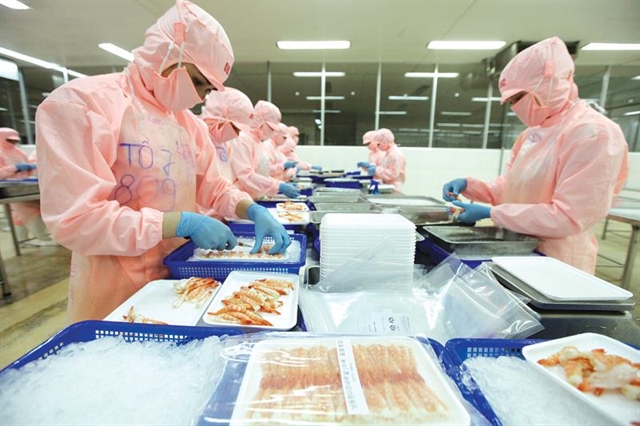 Building agro-forestry-fishery high value chains is crucial for the sustainable development of the agriculture sector in the context of international integration. — Photo baodautu.vn

Agriculture remains the major source of food despite the sector’s falling contributions to GDP – from nearly 40 per cent in the 1990s to less than 15 per cent by the end of 2018.

According to deputy head of the Party Central Committee’s Economic Commission, Cao Đức Phát, it is important to strengthen connectivity to develop value chains for strong farm produce in Việt Nam, and promote investment in agriculture and rural areas amid international integration.

He noted that among 500,000 operating enterprises, only 6,000 work in agriculture. Việt Nam has 10 million farming households with small and micro production scales compared to other countries, he added.

The official stressed the need to boost the role of household production and businesses, especially private firms.

Participants at the event put forward various proposals to improve the links between parties in agricultural production, including developing big firms to motivate the production and the formation of databases for agro-forestry-fishery products.

According to Lê Đức Thịnh, head of the Department of Cooperatives and Rural Development under the Ministry of Agriculture and Rural Development, only 11-14 per cent of agricultural products have been sold through the connections of parties, and only 3-5 per cent sold through connection chains with safe agricultural practices such as VietGap and GlobalGap.

He underscored the necessity to train farmers on production standards and raise their public awareness of enhancing farm produce quality.

Vice President of the Việt Nam Co-operative Alliance, Nguyễn Văn Thịnh, said that it is crucial to amend the 2012 Law on Cooperatives and the Land Law to deal with problems in land accumulation for production development, while building models for cooperatives associated with key products of each locality. Cooperatives themselves should reform and improve their capacity to meet integration and linkage requirements.

Nguyễn Ngọc Đán, chairman of smart online monitoring company United, proposed the training of agricultural workers by opening courses for farmers to master the cultivation of particular plants with the support of the local government.

It is necessary to set specific requirements for connection chains with detailed mechanisms and benefits of each member, he stressed.

Deputy General Director of the Agriculture and Rural Development Bank, Lê Xuân Trung, stressed the need to strengthen the role of the provincial People’s Committees in chain development, while monitoring and supporting local firms to join the chains, and providing risk and price insurance for members of the chains to reduce their losses.

Thái Hương, founder of TH Group said in reality, in times of crisis, agriculture is the lifesaver of the economy.

Therefore, she proposed to consider the building of high value chains in the agriculture sector, meeting requirements of key markets as one of the targets by 2025 to create a breakthrough.

She proposed to implement some pilot projects under the value chain while having leading firms group in the sector to develop policies.