Agriculture sees lowest growth in five years
The agricultural sector is expected to grow 2.21 percent in 2015, a drop of 1.4 percent over 2014 and the lowest rise in five years, said Nguyen Thi Hong, head of the Agriculture and Rural Development Ministry’s Planning Department, at a press conference in Hanoi on November 4.
Go Back 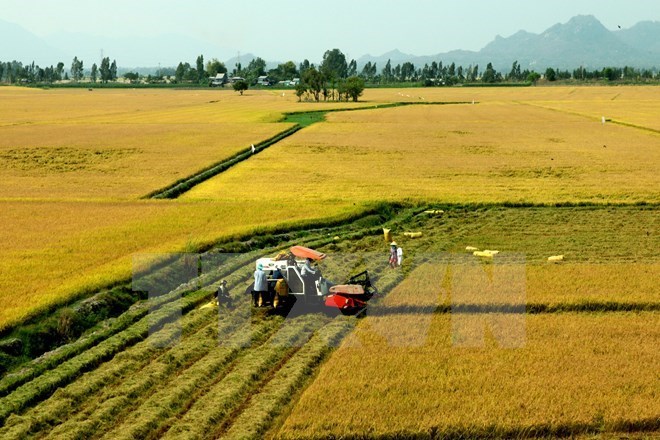 The sector’s production this year is predicted to grow only 2.3 percent, a year-on-year decrease of 1.8 percent.

According to Hong, two main difficulties facing the sector are weather and market. Impacts of El-nino phenomenon have seriously affected cultivation and fishery – two areas contributing greatly to the whole sector’s growth.

At the same time, USD exchange rate fluctuations in many countries recently also influenced agro-forestry-fishery exports as USD is a main means of payment, she said.

Although the State Bank of Vietnam has depreciated Vietnam dong against US dollar, the adjustment still failed to keep pace with the devaluation of other currencies, especially the Chinese yuan and euro, making Vietnamese agricultural products less competitive in terms of price in foreign markets.

Besides, many markets have increased technical barriers, including food safety regulations and non-tariff barriers, creating more difficulties for Vietnamese farm produce, she added.

Between now and the year’s end, a number of measures will be rolled out to expand market and remove difficulties for production and export, according to the Ministry of Agriculture and Rural Development.

The steering committee for agricultural market will evaluate the supply and demand of key products to propose measures to develop the rice market in the rest of the year.

The TPP and ASEAN Economic Community (AEC) will both bring fierce competition to the sector. Although 70 per cent of Vietnamese enterprises are involved in agriculture only some 30 per cent are able to seize the opportunities from free trade agreements.

The forum heard of three bottlenecks for agriculture competitiveness from Deputy Chief Representative of the Japan International Cooperation Agency (JICA), Mr. Kakioka Naoki. Contract agriculture was the first bottleneck. “Transparency in food transport and the efficiency of farming are still issues,” he said.

Independent economic researcher Ms. Pham Chi Lan said it’s not fair for enterprises as if they break contracts with farmers they are criticized heavily while farmers are held less responsible if they do so. Professor Vo Tong Xuan even joked that Vietnamese farmers are the freest in the world as they lack discipline.

Secondly, low value per land area is a problem for Vietnam’s agricultural competitiveness. Lam Dong province, Mr. Naoki said, which is one of the most successful provinces in agriculture, earns only VND517 million ($23,166) per hectare of vegetables whereas the figure in the Cameron Highlands in Malaysia is VND840 million ($37,640). On average, in 2013 Lam Dong earned VND101 million ($4,525) per hectare of agricultural land while in the Cameron Highlands it was VND941 million ($42,166).

Agricultural finance, meanwhile, is considered the biggest problem. “Low asset valuations due to low government agricultural land price ranges results in loan demand for investment being unmet,” Mr. Noaki said. Banks value the land of enterprises at about 50 per cent of the actual market value, limiting the amount they can borrow.

Moreover, interest rates for agriculture enterprises in Vietnam are still high, Chairman of the Dong Nai Provincial Livestock Association Mr. Nguyen Tri Cong said. “The rate in foreign countries is about 4 per cent but in Vietnam it is about 10 per cent,” he said.

Insufficient loans for the agriculture sector impede the introduction of high-technology, which is necessary for Vietnam to produce higher value-added products efficiently, Mr. Naoki stressed. “Insufficient loans, investment, and production output are bottlenecks for Vietnam in developing the food value chain.”

The forum also heard of solutions to address the difficulties, such as government planning for planting and breeding in each region and the provision of more incentives to agriculture enterprises.