Becamex to invest in new Hanoi software park
Hanoi has approved another software park project that is expected to cost about VND24 trillion (US$1.08 million) as the city aims to further expand its information technology sector.
Go Back 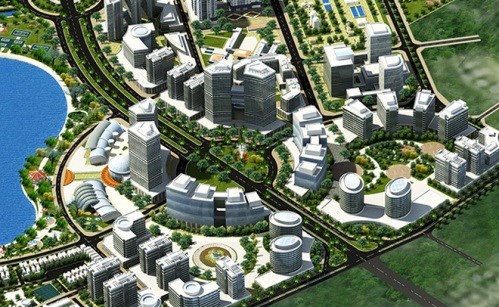 A design of the software park in Hanoi. File photo
The project, developed by Becamex Investment and Trade JSC, will be built on a section of Vo Nguyen Giap Street between the city center and Noi Bai Airport, local media reported.
A detailed plan will be completed by the end of the month.
Becamex ITC is among 28 members of the Binh Duong-based Becamex IDC Corp., which operates in various fields including finance, insurance, banking, construction and real estate. It owns several large-scale industrial parks across the country.
The new park, backed by Hanoi’s Information and Communications Department, hopes to attract a wide range of IT and content companies which will hire more than 40,000 workers in total.
Hanoi last year approved another software park in Long Bien District. Hanel, a major Vietnamese tech firm, is the developer of the VND10.5-trillion project. Construction is set to complete in 2019.