BIDV opens Yangon branch
The Bank for Investment and Development of Vietnam (BIDV) has inaugurated a branch with capital of US$85 million in the Myanmar city of Yangon.
Go Back 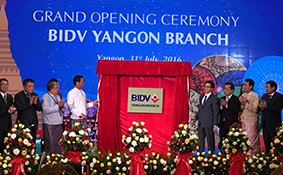 The opening ceremony last Sunday of the branch, the first of a Vietnamese commercial bank in Myanmar, was attended by Myanmar Vice President U Henry Van Thio, Deputy Prime Ministers Vu Duc Dam of Vietnam, Sonexay Siphandone of Laos and Men Sam An of Cambodia, and Myanmar’s Central Bank governor Kyaw Kyaw Maung.

BIDV was licensed to establish its Yangon branch after it had been present there for six years through a representative office.

Vietnam is now the 10th biggest investor in Myanmar with 11 projects worth a total of US$693.3 million. Two-way trade between the two nations amounted to US$435 million last year, up three-fold against 2010.

BIDV, Sacombank, SHB, MB and the Vietnam Bank for Industry and Trade (VietinBank) are present in Laos.