Big M&A deals to be made in 2016
Retail is leading the merger and acquisition (M&A) market in the number of M&A deals and value in 2016.
Go Back 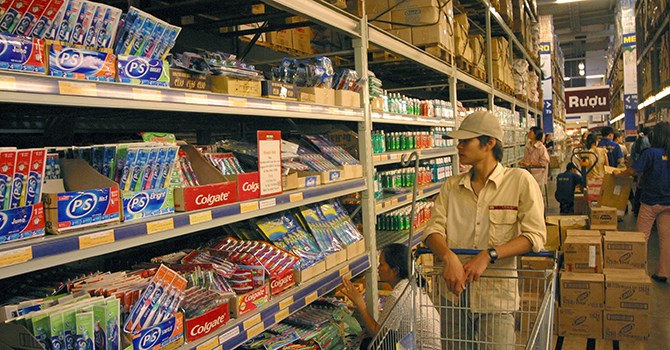 The M&A deals in the retail sector in 2015 had total value of $1.5 billion, which shows Vietnam is the key market in the eyes of foreign retail groups.

The deals, in which Thai BJC Group bought Metro Cash & Carry Vietnam at $880 million and Power Buy, a subsidiary of Thai Central Group, bought 49 percent of stake of NKT, the owner of the Nguyen Kim home appliance distribution chain, are believed to be the most impressive.

Meanwhile, Vingroup is believed to be the biggest buyer. The conglomerate, established as a real estate developer, decided to jump into the retail sector and has acquired a 100 percent stake of Ocean Retail.

The US-based A.T. Kearney, a consultancy firm, believes that Vietnam ranks 28th among the most attractive retail markets in the world.

Analysts believe the retail market will be even hotter in 2016 with a series of Thai retail chains gearing up with their plans to buy Vietnamese retailers.

After wrapping up the Metro Cash & Carry deal, BJC has announced it would compete to take over Big C which is now owned by French Casino.

BJC has invested in Family Mart which has changed its name into B’s Mart.

Consultancy firms are believed to be less hot than other business fields. However, a deal in the field which was made in early 2016 has become well known thanks to its expected influences on the service sector.

Though it was not a big deal, analysts believe the deal would have important significance in the service sector, because Ernst & Young Vietnam is one of the leading consultancy firms in Vietnam with nearly 1,000 workers and experts.

According to Tran Vinh Du, an M&A expert, as more M&A deals are made, the demand for related services has increased rapidly, from consultancy and business valuation to legal services.

He also noted that more and more businesses are under restructuring, saying that this is useful for businesses which expand rapidly and have operation scale much larger than the initial scale.

Ernst & Young thinks that 2016 may be the year for the world’s big consultancy firms to land in Vietnam, where they can see great potential for development as more and M&A deals are made.

Sources said that the ‘big four’ (four biggest auditing & consultancy firms in the world) all had two-digit growth rates in recent years.