Bosch expands activities in Southeast Asia
Bosch Group, a leading global provider of technology and services, is planning to invest around 80 million euros in Southeast Asia this year to support growth in the region.
Go Back 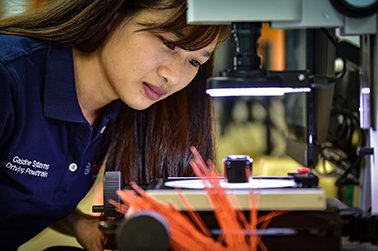 An employee is at work at a Gasoline Systems facility of Bosch in Vietnam – PHOTO: BOSCH

Bosch is continuously expanding its activities in the ten ASEAN member countries. “Southeast Asia is an important region for the Bosch Group,” said Peter Tyroller, the member of the Bosch board of management responsible for Asia Pacific.

Bosch opened new offices in the Philippines and Indonesia with the aim of being closer to its customers in the first half of 2016. It is also strengthening its manufacturing capacity in the region and plans to expand its Mobility Solutions plants in Malaysia and Vietnam.

Additionally, a new plant in Thailand is planned. In the past ten years, Bosch has invested almost 500 million euros in the expansion of its manufacturing and development locations in Southeast Asia.

In 2015, Bosch achieved sales growth of 12% in Southeast Asia, generating sales of more than 780 million euros. It also expects positive development in the current year despite partially volatile economic development in some of the ASEAN markets.

In the first half of the year, business in the Philippines, Thailand, and Vietnam grew well.

Bosch has been present in Southeast Asia since 1919. Today, it employs more than 6,800 associates in Singapore, Malaysia, the Philippines, Indonesia, Thailand, Vietnam, Brunei, Cambodia, Laos, and Myanmar. In the coming years, the workforce is expected to keep growing.

The company has had development activities in Singapore, Vietnam, Thailand, and Malaysia for several years already.

Since 2010, Bosch has operated its first software development center in Southeast Asia in HCMC, Vietnam. Among other things, engineers at the center work on software solutions for the Internet of Things. This makes Bosch an increasingly important software employer in the region. In Vietnam, Thailand, and Malaysia, the company has implemented the German concept of dual education.