Bun bo Hue controversy
The government of Thua Thien-Hue Province has recently stirred so much uproar when it issued a rule on management and use of the bun bo Hue (Hue-styled beef noodle soup) brand name, and is registering for protection of the brand name. There is growing concern over whether eateries, especially those in other parts of the country, should ask the province for permission to make and sell this food.
Go Back 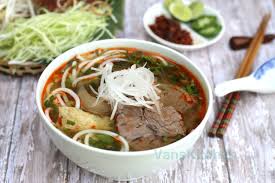 It is normal to seek protection for local specialty products, particularly those relating to geographical indication, to ensure their quality and authenticity, and promote them. But the move taken by Thua Thien-Hue has caused a controversy.

According to the rule that came out on July 13, the provincial government is the owner of the brand name while the Thua Thien-Hue Tourism Association is responsible for managing it. In particular, the association will coordinate with the provincial Department of Science and Technology and relevant units to promotebun bo Hue, and oversee the enforcement of the regulation.

Anyone who wants to provide dining services with bun bo Hue on the menu should apply for permission. The new rule has also sparked criticism as it sets out a recipe for the food. Many people have dismissed this one-size-fits-all recipe, saying people in different parts of the nation have different tastes.

Nonetheless, in response to public concerns, Phan Ngoc Tho, vice chairman of the province, said in Thanh Nien newspaper that it is necessary for the province to register for protection of the bun bo Hue brand name. “Bun bo Hue is a popular food but it varies in different parts of the country. The registration of bun bo Hue for brand name protection is intended to make it a specialty of Hue… with quality, flavor and hygiene guaranteed.”

According to Tho, the province is registering with the National Office of Intellectual Property of Vietnam to protect the brand name. Once it is officially protected, any organizations and individuals selling the noodle soup with beef could use the bun bo Hue logo as wished. Meanwhile, those who do not want to use it could still do business as usual but should be responsible for food safety. Tho rejected speculation that vendors of bun bo Hue would have to come to the provincial government to seek permission.

But Thanh Nien quoted Dinh Manh Thang, chairman of the Thua Thien-Hue Tourism Association, which is in charge of overseeing the execution of the bun bo Hue rule, as clarifying that permission would be required for those intending to use the bun bo Hue logo for business. Sellers would then have to observe the requirements specified, he added.

Facing strong criticism, Tho said the intellectual property agency would not approve its application for bun bo Hue brand name protection if what the province is doing is against the law.

Thua Thien-Hue has submitted an application to the National Office of Intellectual Property seeking bun bo Hue brand name protection. This means people can still sell bun bo Hue in the province and elsewhere in the country as long as they use the registered logo with prior permission from the provincial tourism association and meet the requirements.

Le Ngoc Lam, deputy director general of the National Office of Intellectual Property, said in Thanh Nienthat the office is handling the application of Thua Thien-Hue. In the law on intellectual property, there are cases in which only logos are protected.

Lawyers also agreed that permission would have to be sought if the registered bun bo Hue logo is used.

Thang of the provincial tourism association took Trung Nguyen coffee shops and Pho 24 restaurants as examples, saying cafés or eateries using the two brand names must meet the requirements of the brand owners.