Home » Press » Businesses get lost in ‘forest of sub-licenses’

Businesses get lost in ‘forest of sub-licenses’
A survey by the Vietnam Chamber of Commerce and Industry (VCCI) has found that businesses operate under the regulation of 7,000 sub-licenses or 7,000 business conditions.
Go Back 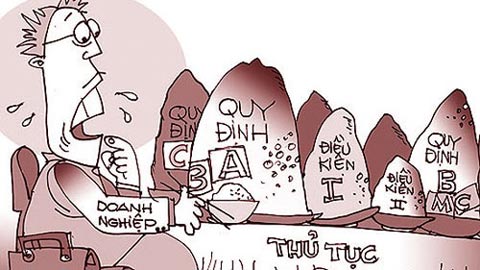 ‘Sub-license’, or ‘giay phep con’ as called by Vietnamese means the regulations set by ministries and management agencies which enterprises have to follow to be eligible to do business.

A truck of a foreign invested enterprise (FIE), which was on the way from the enterprise’s factory to its storehouse, was stopped by inspectors from the HCMC Transport Department.

The inspectors stated that the driver violated the government’s Decree No 86 and the Ministry of Transport’s Circular 63 on conditions for providing transportation services.

Legal regulations require some kinds of vehicles to bear a badge when in circulation.

The truck did not have a badge, and the inspectors decided to seize the driver’s D-class driving license.

The company argued that it does not provide transportation services and does not collect fees from anyone under any form. The truck was just carrying products from its factory to the storehouse.

The enterprise’s representative stressed that as an FIE, it is not allowed to provide transportation services and thus would have no badge.

The representative said the enterprise has lodged complaints to many state management agencies asking for intervention in the case. It will still be fined if its trucks continue rolling on roads.

The company is not alone. Thousands of other businesses have been suffering from the thousands of sub-licenses which set unreasonable requirements on many different business fields.

In 2015, the Ministry of Justice listed many sub-licenses which it found ‘absurd’ and ‘illegal’, including ones for motorbike and bicycle repair and for goods carried by motorbikes.

The Tien Giang Enterprises’Association, in a document to the Prime Minister complaining about sub-licenses, emphasized that it was unreasonable to force every rice export company to export more than 10,000 tons of rice every year.

The Decree 109 on rice export conditions also stipulates that rice export companies must have certain material growing areas and the areas must increase year after year.

Nguyen Dinh Cung, head of CIEM, said he could not understand why Decree 86 stipulates that transport firms in central provinces and cities must have 20 vehicles and more, and firms in other provinces must have 10 vehicles at least.

“In passenger transport, only three factors should be required: safe vehicles, good roads, qualified drivers. And no more,” he said. “Why do service providers have to have 20 vehicles?”