Cable-stayed bridge in southern Vietnam to shine with colorful lights this month
A VND30 billion ($1.32 million) lighting art project, which is scheduled to be operational this month, will help highlight the Can Tho Bridge in the Mekong Delta city of Can Tho with seven colors during four to eight hours per night.
Go Back 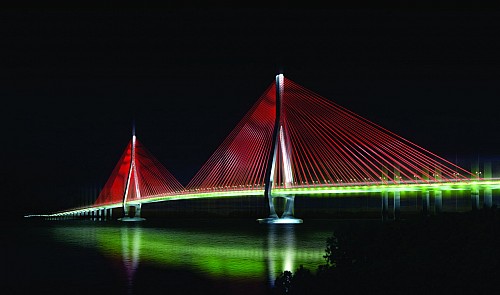 The project, including 350 sets of high-capacity colorful lights, is in its final-preparation stage so that it will begin to light up the cable-stayed bridge on December 22, according to Tran Viet Phuong, director of the Can Tho Department of Culture, Sports and Tourism.

The high-voltage lights are installed along the main span of the 6-kilometer bridge to illuminate both the cable system and its two sides at the same time.

The project, managed by computer software through 2027, will light up the cable system with the red color and embellish the two sides of the main part of the bridge with seven different colors.

It is intended to turn the bridge into a tourism site by night and is invested and operated by a local mechanical and advertising firm, Huy Nam, which will be allowed to manage a number of advertising positions on both sides of the bridge in exchange for its investment.

Work on the Can Tho Bridge, spanning the Hau River and linking Can Tho City and Vinh Long Province, started in September 2004 with the total investment of VND4.83 trillion ($212.6 million), of which 85 percent was official development assistance from the Japanese government and the remaining 15 percent from the Vietnamese government.

Construction was scheduled for completion in late 2008. However, on September 26, 2007, a bridge segment on the side of Vinh Long collapsed, killing 55 and injuring 80 Vietnamese workers.

The accident caused the progress of the project to be delayed for over a year. At the time of inauguration in April 2010, the cable-stayed bridge had the longest main span in Southeast Asia.

Can Tho City is the political and economic hub of the 18-million strong Mekong Delta.