Cashew exports rise strongly in first quarter
Việt Nam exported 74,580 tonnes of cashew worth US$758 million in the first quarter, according to the Việt Nam Cashew Association (Vinacas)
Go Back 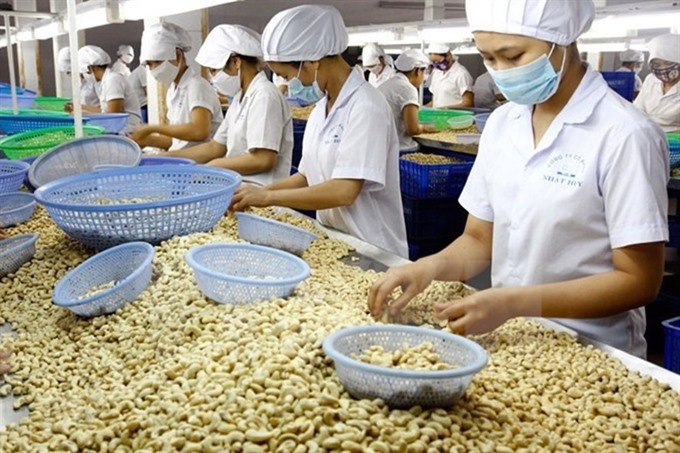 This represented increases of 33.8 per cent in volume and 46.6 per cent in value year-on-year, with the US, China and the Netherlands being the biggest buyers.

Exports to all markets except Australia increased.

The average export price was 10.2 per cent higher from a year earlier thanks to an increase in shipments of processed items.

Exports of highly processed products accounted for 5 per cent of the total, while organic cashew shipments were modest, he said.

“The prospects for cashew exports in the remaining months of the year are very positive.

“As usual, global cashew trade will become busy from the second quarter.”

This year, the sector targets exports of 300,000 tonnes, a 17.28 per cent decline from last year, but hopes to achieve last year’s turnover of $3.6 billion by increasing the ratio of processed and high value-added products and by-products, he said.

Delegates at the meeting said domestic cashew output has fallen sharply this year due to unfavourable weather and diseases since last year.

Phạm Văn Nguyên, a cashew expert, said: “A few weeks ago, we had forecast that cashew output will reach 400,000 tonnes this year, but after conducting fact finding trips to cashew cultivation areas, we think the output will be around 300,000 tonnes.”

Some cashew farms in Bình Phước Province have just yielded 300kg per hectare compared to more than one tonne previously.

Lê Quang Luyến, the association’s director of finance and president of Phúc An Processing and Trading Company, said the yield per kernel too is lower this year.

Last year, the industry had imported 1.5 million tonnes of cashew for processing for export, and this year it expects to import one million tonnes, he said.

Import prices are rather high, so cashew processors must be careful to avoid losses, he warned.

There is greater demand for organic cashew for hygiene and food safety reasons, Luyến said.

“I have worked with some co-operatives to produce organic cashew, hoping that from the next crop, my company can start exports of organic nuts.”

The organic method offers very low yields of 600-700kg against a normal output of two tonnes, he said.

“So businesses must have ways to ensure profits for farmers to encourage them to switch to organic farming.” (Source: VNS)