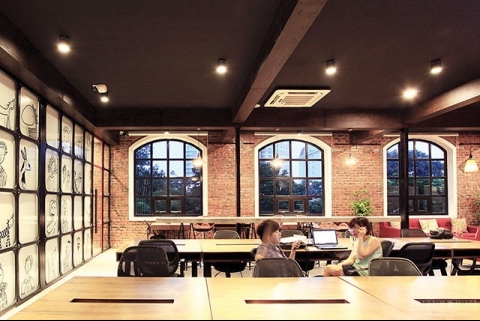 “The process was very complex because opening a business requires a lot of knowledge,” he told VET. “But I was fortunate to have mentors at that time who helped me overcome the obstacles.”

About three years ago a number of co-working spaces opened but must most seemed to close quite quickly.

“What a stupid idea – nobody wants to pay a membership fee for a co-working space. Freelancers and startups want to work at home or at a café.” Mr. Jason Martin Lusk, Founder of ClickSpace in Hanoi, heard many such sentiments a few years ago.

“Now, no one says it is a stupid idea, because everyone wants to open a co-working space,” he said.

“Young people especially like it, because you can do what you do without having to worry about what’s happening outside.” The spirit of entrepreneurship motivates many people to try a startup.

“Demand for co-working space will become higher,” he said, with more people realizing its value. “We are here for our passion and we are here to pursue something greater.”

“Three years ago co-working spaces were new and nobody really trusted it, so there was no market,” he said.

Vietnam is integrating deeper into the world and gaining a great deal from the process.

“There is more talent in Vietnam, with more overseas Vietnamese coming back to set up their own companies and there are more Vietnamese companies cooperating with foreign enterprises,” Mr. Tin said.

“This is the right time for us to create a place to gather together in order to create wonderful things.”

All co-working spaces in Vietnam are startups, and one of their main purposes is to serve the startup community and support the startup ecosystem, besides providing a place for people to work together.

Thus, they are required to differentiate themselves via multiple methods as a place to work and a place that supports startups.

Startup co-working spaces all face major challenges, Mr. Lusk said. “There is no difference between opening a restaurant and opening a cafe, a bar or any other business,” he said.

Three years ago, when his co-working space first opened, he incurred a loss. “It takes time and can’t be rushed,” he explained.

“There is no way to speed it up because it needs time and patience to build a community, step-by-step, person-by-person.”

The pressure to differentiate, however, is the most challenging thing. A co-working space has no potential market if it operates on its own, according to Mr. Pham Quoc Dat, Director of the HATCH! Program.

All owners co-working spaces interviewed by VET agreed that building a community is their focus, especially for startups. Even so, each co-working space has its own way of operating.

“From our point of view, a co-working space for startups should focus on the working environment, providing a true office that is flexible to different needs, and be accompanied by incubation and networking activities,” said Mr. Dat.