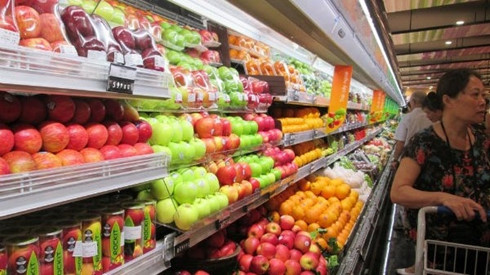 Such developments raised concerns among domestic retailers about the threat of losing market share, being gradually taken over and then eventually being wiped out.

But in one respect, such blows from foreign companies have awakened domestic retailers, driving them to change, adapt and play by international rules.

Vietnam is currently regarded as one the most dynamic and attractive retail markets in Asia and the world at large.

Domestic retailers are facing growing pressure from an increasing number of foreign competitors as Vietnam is now opening its economy in compliance with international integration commitments.

A recent report by the German market research firm GfK shows that Vietnam’s retail market revenue reached more than US$100 billion in 2015 and the figure is expected to be much higher this year.

Experts have also stated that with a population of over 90 million, Vietnam’s retail market remains enormously appealing to both domestic and foreign retailers.

With such potential, Vietnam has become a favourite destination of many foreign retailers.

The mass appearance of giant retailers such as Aeon (Japan), Lotte Mart (Republic of Korea) and Central Group (Thailand) is likened to a wave sweeping Vietnam’s retail market.

One may think that domestic retailers will give in to foreign competitors, but there are signs that a number of major domestic retailers will not accept inaction nor will they allow themselves to trail behind foreign competitors, on the contrary, many of them are putting together human and financial resources to get ready for a new game where they can compete fairly with deep-pocketed foreign enterprises.

With a wave of mergers and acquisitions, Vietnam’s retail market is arguably no longer the exclusive playing field of domestic companies but has become a fertile ground in the eyes of foreign giant retailers, especially multinationals.

This will increase the challenges for Vietnamese enterprises. Like two sides of the same coin, mergers and acquisitions have both benefits and disadvantages.

They will have a positive effect if domestic enterprises take a proactive stance when Vietnamese enterprises lose their brands and are overwhelmed by foreign ones, and when profits from the retail market are channelled out of the country.

Overall, if the government, associations and enterprises are proactive, mergers and acquisitions will add more energy for growth, otherwise, domestic retailers will miss the chance and lose the market.

He adds that Saigon Co.op itself has already been accustomed to competition from foreign enterprises for years and with a strong wave of mergers and acquisitions, the company must adapt by taking a more proactive and serious approach to mapping out strategies.

The company has widened the network of its retail shops and forged closer ties with customers, producers and service providers.

Anh emphasised that mergers and acquisitions create greater competition so that Vietnamese enterprises must adjust their strategies, take bolder steps and learn from foreign enterprises.

It can be said that if domestic enterprises are not proactive in seeking new ways for development, they will surely be defeated on home ground in the face of increasingly stronger investment flow into retail.

In fact domestic retailers are still inferior to their foreign rivals in many respects.

Despite having made improvements, domestic retailers still lack professionalism from chain management technology to goods display while their prices are not competitive, goods are not diverse and quality control is below expectations.

In order to survive in this harsh environment, domestic retailers first have to establish their position by seeking new methods.

At the same time, they should pay more attention to e-commerce, multi-channel distribution, and utilise science-technology and online solutions in goods and order management.

Dinh Thi My Loan, Chair of the Association of Vietnamese Retailers, says that multi-channels, both online and offline, will be the inevitable growth trend.

E-commerce is nothing new in Vietnam and almost all general trading companies have embraced online retail for years.

But this is not as simple as it appears, as consumer confidence, which is already very weak, has been further undermined by some recent incidents when customers reported a loss of funds in their bank accounts for reasons they are still unaware of.

This is one of the reasons why online retail and e-commerce have yet to grow substantially in Vietnam.

There is no place like in Vietnam where customers, after ordering their products on the internet, choose to pay in cash when the products are delivered to their homes.

If things continue in this way, Vietnam will not have a fully developed online retail market, says Loan.

Competition in Vietnam’s retail sector has never been so strong like now when foreign distributors rush to the Vietnamese market to gain market share.

This pressure forces domestic retailers to rethink their business models and enhance their capacity to differentiate themselves from foreign competitors.

Therefore, domestic enterprises should carry out thorough market research and draw up their own strategies, strengthen cooperation with producers, diversify their sale channels both online and at physical stores to serve different types of consumers.