Counting the cost of FDI opportunity
International organisation ActionAid Vietnam recently questioned the annual US$20-million loss of corporate tax income in Vietnam caused by the preferential tax system for foreign-invested enterprises, sparking a discussion on whether the generous treatment of those firms is justifiable.
Go Back 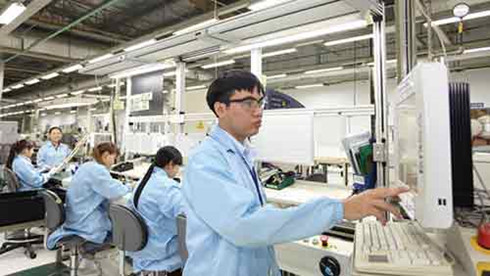 Nguyen Van Phung, a senior official of the Ministry of Finance, said the US$20 million figure (which has not yet been verified as accurate) should not be considered a “loss”, but an “opportunity cost” instead.

He also maintained that Vietnam’s tax policies were completely fair, and that no discrimination was made between foreign-invested enterprises (FIEs) and domestic ones.

“There were indeed differences in the past, but since the common laws on Investment and Enterprises were applied, all policies regarding taxes and preferential rates have been fairly applied to all kinds of firms,” said Professor Nguyen Mai, head of the Vietnam Association for Foreign Invested Enterprises (VAFIE), adding that preferential programmes to promote investment were quite commonplace.

The Provincial Competitiveness Index 2015 (PCI 2015) report pointed out that most developing countries around the world had preferential tax schemes to attract FIEs. According to the report, Malaysia is one notable example.

In 1996, Malaysia accepted the loss of US$2.4 billion in accumulative and corporate income taxes. However, in return, the country received US$30,000 from each job created by an FIE in the country.

From this perspective, Vietnam can see that reductions or exemptions on taxes for FIEs are simply opportunity costs.

Mai noted that when Intel first came to Vietnam, he advised the Vietnamese government to overlook the short-term financial gains and approve 22 out of the 28 tax proposals made by Intel in order to receive the US$1 billion  investment from the multinational corporation.

Following Intel, various tech giants such as Samsung, LG, and Microsoft came to Vietnam, transforming the country into a global manufacturing base and a magnet for other multinational tech firms. According to Mai, this “opportunity cost” is clearly beneficial for Vietnam.

Sizing up the benefits

A recent well-known case is Samsung. When the Republic of Korea (RoK)’s conglomerate requested preferential programmes for its research and development (R&D) centre in Hanoi, there were concerns that Samsung was crossing a line with its requests.

In fact, Samsung also requested preferential treatments when investing in multi-billion-dollar projects in the northern provinces of Bac Ninh and Thai Nguyen, and Ho Chi Minh City, with the total registered investment capital of US$15 billion thus far. The question is whether Vietnam will gain anything in return for these preferential tax treatments.

A few years ago, when Vietnam commemorated 25 years of successfully attracting foreign direct investment (FDI), the government considered preferential programmes for each project, particularly large-scale ones which can have a substantial impact on the Vietnamese economy and society.

At that time, experts agreed that appealing policies for FIEs were necessary to draw in strategic investors. Preferential programmes are thus acceptable, particularly because these schemes (for Samsung, LG, Microsoft, and others) are all within legal boundaries.

“I believe that Samsung’s preferential proposals are already included in Vietnamese laws, so there’s no need for a special request,” said Mai. “For instance, with R&D projects, Vietnam allows the disposition of land-based assets and land usage rights.”

The issue remains whether Vietnam will reap any benefits from these policies, which can be examined by taking a closer look at Samsung.

By employing 120,000 people with a monthly average wage of VND6 million (US$269) per worker, Samsung will give VND720 billion (US$33.2 million) per month and VND8.6 trillion (US$385 million) per year back to Vietnam in return for the country’s preferential schemes.

These figures do not include indirect impacts and contributions, such as exports, R&D, and growth for supporting industries, all of which further impacts socio-economic development in Vietnam.

“The Samsung complex has a huge influence on the socio-economic development of Bac Ninh. Last year, they paid VND2 trillion (US$89.7 million) in taxes, and in 2018 when the preferential rates run out, this figure will be even larger (taking into account only the 50 hectares of land that Samsung is currently using),” emphasised Nguyen Tu Quynh, Chairman of the Bac Ninh People’s Committee.

After witnessing the positive impacts from just one large corporation, others such as Microsoft, LG, and hundreds of other FIEs could make contribution to Vietnam’s growth.

FIEs currently account for 70% of Vietnam’s export turnover and 60% of industrial manufacturing. Their contributions to the Vietnamese socio-economic development are thus undeniable.

Mai noted that Bac Ninh, Thai Nguyen, Dong Nai, Vinh Phuc, and Binh Duong were just some of the Vietnamese provinces that had been benefiting from the increasing FDI flows.

Dau Anh Tuan, director of the Vietnam Chamber of Commerce and Industry’s Legal Department, said that if FIEs brought modern technology to Vietnam, the effect would ripple across the country, pushing up local firms’ productivity and increasing the competitiveness of private Vietnamese firms in the global market. In practice, this is only possible if the domestic and foreign sectors are linked together.

Once again, take Samsung as an example. The conglomerate has organised programmes to help suppliers join its global supply chain, but not many Vietnamese firms have satisfied their requirements.

The PCI 2015 points out that if Vietnamese firms fail to join the hi-tech supply chain, preferential programmes may not bring as many benefits to Vietnam as promised.

If this is the case, the fault does not lie with foreign investors, but with domestic firms. Deputy Prime Minister Vuong Dinh Hue cited some experts as recently dismissing FIEs as “spoiled kids”, and saying the local private sector was thought of as a “neglected kid”.

According to Hue, this problem must be solved by improving local private firms, not by bringing the FDI sector down, as FDI flows are also an important part of the Vietnamese economy.

In early April, the government asked the Ministry of Science and Technology to assess whether Microsoft Mobile Oy Vietnam was truly a hi-tech firm and eligible to receive preferential taxes as stated in Vietnamese laws. As a result, Microsoft’s tax reductions are still pending approval.

This is a commonplace process in Vietnam. Firms that would be given preferential tax treatments must still undergo assessments and evaluations. These companies can only enjoy tax exemptions if they meet various criteria on revenue, the number of staff for R&D, and localisation rate.

Any failure to meet these requirements will result in a cancellation of the firms’ preferential taxes, a policy that is applied to Microsoft, Samsung, and all other foreign invested projects in Vietnam.  The preferential tax programmes are therefore not excessive, but closely regulated on a continuous basis.