Da Nang to commence key projects
The central city has asked the ministry of transport to allocate funds for key transport infrastructure projects – Lien Chieu port and the East-West Economic Corridor No 2 (EWEC2) connecting Thailand, Myanmar, Laos and Viet Nam – in 2016-20.
Go Back 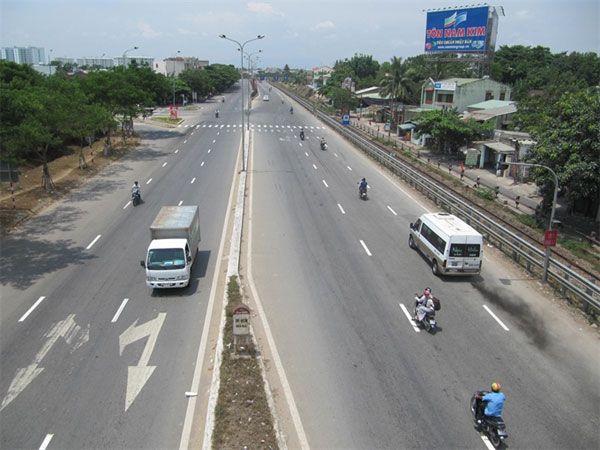 A section of the National Highway No 1 runs through Da Nang City. The central city will commence a series of key road and port projects to establish the city as the logistics centre of ASEAN and the Asia-Pacific region. — VNS Photo Cong Thanh

Vice chairman of the central city’s People’s Committee Nguyen Ngoc Tuan, in a working session with the ministry of transport on Friday, said these projects aim to establish the city as a logistics centre in ASEAN and Asia-Pacific as well as encourage sustainable development and ‘green growth’.

Tuan said the city will start expansion of the National Roads No 14B and 14G, Hai Van Tunnel, remove a railway station in connection with EWEC2, and upgrade Tien Sa port later this year.

“The construction of Lien Chieu port and removal of the railway station alone will cost nearly VND14 trillion (US$622 million). The city will upgrade the second stage of Tien Sa Port as an integrated cargo and tourist port in the second quarter this year,” Tuan said.

“We also ask the ministry to allocate funds for land clearance and resettlement for some sections of Ho Chi Minh Trail and Da Nang-Quang Ngai Expressway, and Nam O Bridge and the Co Co River waterway system,” Tuan said.

Tuan also said the city, in co-operation with Japanese International Co-operation Agency (JICA), will make a pre-feasibility study on the construction of Lien Chieu port and the EWEC2.

Minister of transport, Truong Quang Nghia said almost all transport infrastructure projects would face a deficient fund this fiscal year when mid-term funds only met 11 per cent of approved projects in 2016-20.

“The country needs 116 trillion (US$5.1 billion) for developing transport infrastructure projects in 2016-20, but only 11 or 12 per cent of the proposed funds would be allocated,” Nghia said.

“The ministry, in co-ordination with the ministry of finance, will soon reserve funds for top priority projects in serving the Asia-European Co-operation (APEC) in 2017, and key roles for socio-economic development,” Nghia said.

“The ministry will soon review the construction of Lien Chieu port before 2020 and put it into operation in 2025 to ease congestion and overloading Tien Sa Port,” he emphasised.

He also said the city should look at raising different sources of funds including Official Development Aid (ODA) and domestic and foreign investors in filling up the fund deficiency from the Government.

Nghia also warned the city to monitor and implement strict control on waterway transport, traffic violations and overloading of trucks.

He said the boat accident that occurred on June 4th was a tragedy, and has hurt the city’s tourism industry.

On the subject, the city’s party secretary Nguyen Xuan Anh said the city will ban all modification work in changing fishing boats into cruising vessels.

He said investigation agencies are poised to prosecute the suspect in the boat accident, while some officials have already been suspended.

The central city also plans to upgrade Son Tra Port for 20,000DWT ships and build up an Inland Container Depot (ICD) to support ports in Da Nang and Chan May port in neighbouring Thua Thien-Hue Province.

A survey from the ministry of transport revealed that Da Nang, which is situated at the end of EWEC, would handle 29 million tonnes of cargo by 2030.

According to Viet Nam’s seaport system development plan to 2020, Da Nang Port has been confirmed as a major commercial port in the region, making it one of the key gateways to the East Sea from the sub-Mekong region.