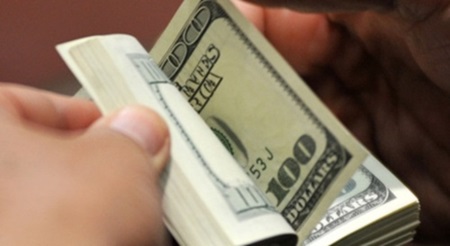 On August 19, SBV had devalued the dong by another 1 per cent, its third currency depreciation in 2015, making the inter-bank exchange rate reach VND21,890 per American dollar. With a margin of 3 per cent, the dollar is now being traded between VND21,233 and VND22,547. The adjustments followed China’s yuan devaluations.

Yesterday, most money exchangers on Ha Trung Street, one of the most popular spots for money exchange in Ha Noi, sold an American dollar at rates between VND22,650 and VND22,750, as much as 100 to 200 dong higher than the ceiling rate.

Most of the commercial banks increased the dollar selling rate by 50 to 70 dong each, making it touch the ceiling rate of VND22,547 per dollar on the same day. Vietcom-bank, Technological Commercial Bank (Techcom-bank), Asia Commercial Bank (ACB) and Dong A-Bank, as well as Vietin-Bank, and BIDV set the American dollar rates at its ceiling rates, while Agri-bank was selling it for VND22,540, or seven dong less.

In the international market, Reuters.com said the Australian dollar fell 1 per cent against the American dollar on the same day, as investors shunned risk assets over worries that resource exporters such as Australia would be severely affected by a slowdown in the Chinese economy. Thus, the Aussie dollar fell to as low as $0.7250, near the six-year low of $0.7217 of earlier this year. A day earlier, Mexico’s peso slipped to a new low against the dollar in trading, breaching the 17 pesos per dollar mark for the first time.