Domestic animal feed controlled by import and FDI businesses
Viet Nam will produce more than 23 million tonnes of animal and poultry feed this year, according to a report by the Ministry of Agriculture and Rural Development (MARD).
Go Back 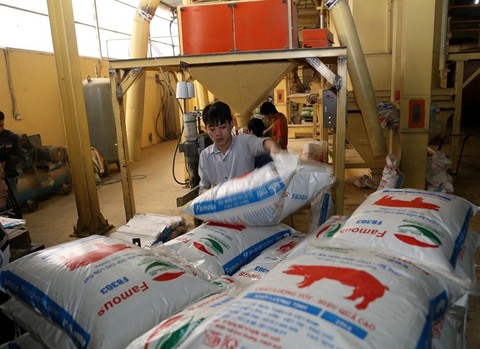 An animal feed production line at Famous Viet Nam JSC in the northern province of Phu Tho.

The report showed that the output of animal and poultry feed has increased rapidly in recent years, up 13 million tonnes compared to 2008.

However, the market is now tilted towards foreign direct investment (FDI) enterprises.

According to statistics from the Viet Nam Animal Feed Association, the country had 240 animal feed production businesses, of which 180 were domestically run. Although domestic enterprises outperformed in terms of quantity, foreign firms still led the way in terms of capacity and market share.

FDI enterprises are developing their production to dominate the animal feed market. Since the beginning of 2018, a series of new factories have been inaugurated, including a US$31.5 million factory in the northern province of Ha Nam, which is the fifth to be funded by South Korea’s CJ Group, and another from Mavin Austfeed Dong Thap worth $30 million, which is also the fifth to be invested by Mavin Group, a joint venture between Australia and Viet Nam.

In order to regain market share, a large number of Viet Nam’s big companies such as Masan, Hoa Phat, Hung Vuong and Vingroup are investing in animal feed production. However, the process could prove lengthy as FDI many companies have been in the Viet Nam market for 10-25 years, with advantages of investment capital, modern technology and long-term strategies to dominate the market.

“FDI enterprises have a history of research and invention for animal feed suitable for each growth stage of pigs and chickens,” said vice chairman of the Viet Nam Animal Feed Association, Pham Duc Binh.

Meanwhile, domestic enterprises are vulnerable due to lack of capital, slow investment in modern production lines, and a shortage of raw materials,” he added.

To minimise the monopoly of FDI enterprises in the domestic market and create competition on prices, Binh said the State should plan raw material areas, and have preferential policies for domestic enterprises to borrow capital to build them. On the side of domestic production, plans and long-term strategies are also needed.

Tran Xuan Dinh, deputy director of MARD’s Department of Cultivation, said that domestic corn production had met about 40 to 45 per cent of demand for animal feed processing.

“At present, all imported maize is used for the production of animal feed. Viet Nam only produces rice bran and cassava. We have failed to develop feed production areas because of poor crop productivity, and people have not joined the animal feed supply chain for businesses,” said Dinh.

Agricultural expert Dang Kim Son said that the value of the poultry sector was low due to a dependence on feed imports. At present, farmers only made a profit through hard graft and the real profit fell into the hands of importers and producers, mainly FDI enterprises.

In its latest forecast, the Ministry of Industry and Trade confirmed that demand for imports of animal feed will continue to increase, with the possibility of spending $3.8 -3.9 billion by the end of this year.

According to the US Department of Agriculture’s forecast for 2019, 76 per cent of Viet Nam’s total raw material would come from imports as the animal feed sector continues to grow. Raw materials include soybean powder, corn, other cereals and bran from copra, canola and rice bran. Imports also includes animal proteins such as meat and bone meal (MBM) and fish meal.

Deputy director of MARD’s Department of Livestock Production Nguyen Xuan Duong said that Viet Nam could produce 150,000 tonnes of beans each year – not enough to meet the demand for human consumption. For maize, the country could supply three million tonnes per year, accounting for half of the total demand.

“We will not necessarily continue to expand ​​maize plantations while other countries’ corn is much cheaper. Viet Nam should reserve land to grow other crops with higher economic value such as fruit trees, cash crops and herbal trees,” said Duong.