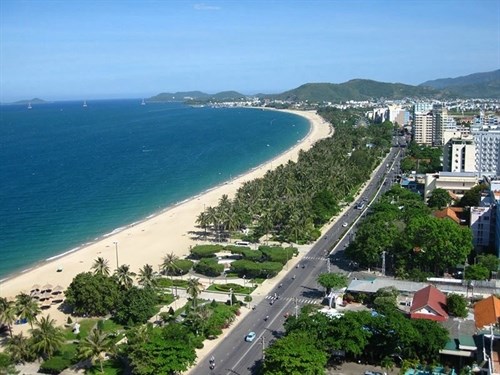 Many hospitality projects have been marketed since the end of 2015, Tram said. According to JLL’s statistics, he said 70-80 percent of the condotels and villas on offer had been bought. The number of customers interested in purchasing villas in the coastal area as second home had increased due to good sales promotions, with many incentives in credit and services, while demand for a condotel or villa in the coastal areas had also seen a rise.

“Ever since the law that allows foreigners to purchase property in Vietnam came into effect last year, we have witnessed the number of enquiries and transactions from foreign buyers increase significantly,” Tram said.

“At the moment, there is a strong interest in the resort and hospitality sector and we expect the uptrend to continue in the near future. The hospitality sector, in general, in Vietnam is in its infancy compared with other countries in the region. Therefore, investors and home buyers can see the potential for strong future growth.”

“In terms of location, Phu Quoc, Nha Trang and Da Nang are cities with the potential to attract foreign buyers, as they are very popular with international tourists because of their beautiful beaches and the many resorts and hotels along the coast.”

Expert Dang Hung Vo said the property segment for tourism and resorts has shown great potential and received a higher supply since the end of 2015.

The segment is expected to develop further this year and beyond because it will benefit from the better transport infrastructure, including airport and highways, good designs of hospitality projects and professional management services, he said.

In addition, price support and aid from banks in capital for projects are also factors that have attracted investors.

Meanwhile, according to Savills Vietnam, most hotel resorts have been offering luxury villas for sale with a beach view, an international operator and a management rental pool.

A new marketing strategy involves guaranteeing returns from the developer for a period of three to 10 years at a return of 6-10 percent per annum. The sale of resort villas is strong with robust interest from the local market and offshore purchasers looking to hedge a relatively stable currency, combined with potential capital growth. The prices of coastal villas generally range from 400,000 USD to above 5 million USD.

Vietnam is one of the fastest growing tourism destinations in Southeast Asia, driven by the entrance of international hoteliers, an improved visa policy and investment in key infrastructure.

The visible demand is evident with the significant presence of tourists from prosperous countries supported by reputable hotels. With greater discretionary income, these international tourists spend more compared to domestic citizens, who often choose three-star or lower rated accommodation.

The development of international airports over the last five years has supported tourism growth. Last year, total arrivals by air reached more than six million, or approximately 80 percent of total arrivals in the country. Charter flights from key markets, such as China and Russia, into Da Nang, Khanh Hoa and to a lesser degree Phu Quoc have become popular.

International hoteliers have continued to show interest in Vietnam’s coastal tourism destinations. Many projects will be introduced in the market in the next couple of years, especially in Khanh Hoa and Phu Quoc.

The Cam Ranh peninsula is an emerging destination, and by the end of 2015, more than 30 projects had been approved for construction, with 13 either ongoing or slated for launch in the next few years.

Phu Quoc is a late entrant in this upscale market but is expected to expand quickly. Though five-star supply is limited, the island has garnered large-scale investment for its tourism industry. Five-star supply is growing rapidly with several new projects lined up in 2016-2017, such as Crowne Plaza Hotel, Novotel Resort, Sonasea Villas and Resort and Sunset Sanato Premium Complex.