Drought hits Vietnam fish farms hard
Drought and consequential saltwater intrusion in the first three months of 2016 have had a devastating impact, destroying thousands of hectarage of prime fish farming area
Go Back 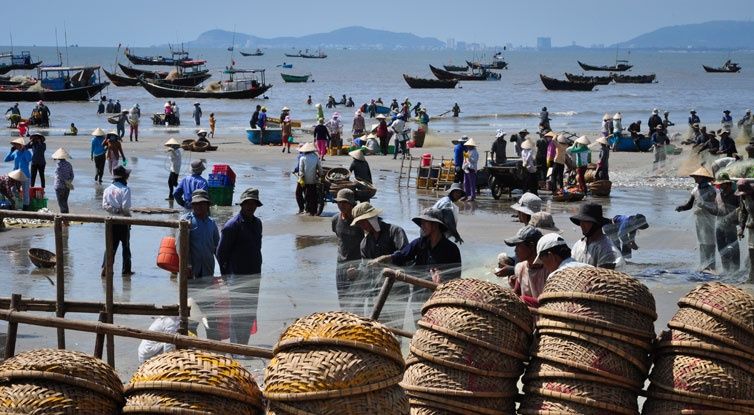 “More than 11,000 hectares have been lost in Ca Mau and Kien Giang provinces alone said a representative of the Department and conditions show no sign of improving anytime soon.

The Ministry of Agriculture and Rural Development (MARD) in turn reports that Ca Mau has been the most badly affected with over 70% of its farming area damaged, followed by Tra Vinh and Ben Tre provinces with over 30% of their areas destroyed.

“The drought has affected the Mekong Delta region severely,” said Nguyen Do Anh Tuan from MARD.

Eight out of the 13 provinces in the region have declared a state of disaster due to the prolonged dry spell including Kien Giang, Long An, Ca Mau, Tien Giang, Vinh Long, Ben Tre, Soc Trang and Tra Vinh.

Almost the entire planning area for brackish water shrimp has been hampered by the salinity brought about by the drought, especially farming areas downstream of the Hau River, in Ben Tre, Soc Trang, Tra Vinh and Kien Giang provinces.

The region’s aquaculture development plan appears to be in imminent danger of coming apart at the seams, said Mr Tuan.

Despite the shortage of usable water, total production of fish (including shrimp and other crustaceans) during March exceeded 441,000 metric tons, a 2.3% increase against last year’s same period.

Additionally, the Vietnam Association of Seafood Exporters and Producers (VASEP), reports fish exports in the first quarter jumped nearly 9% over last year’s corresponding three-month period to US$1.4 billion, which they consider positive news in light of the toll exacted by the drought.

According to VASEP, shrimp was the main export driver for aquaculture during the first quarter of the year, which benefited from an uptick in sales prices ranging four to five percent over last year.

“The drought, oddly enough, caused a reduction in supplies that in turn actually caused the sales price to bump up in the first quarter,” said Mr Tuan.

Despite the superficial positives, aquaculture is bracing for the brunt of the impending looming crisis yet to come. The saltwater intrusion will undoubtedly continue to chip away at the fish farming habitat and further exacerbate the situation, further diminishing the total productive hectarage.

The processing capacity for Ca Mau Province is large but raw shrimp supplies are scant and hard to come by, meeting only half of the demand.

If the weather continues as is, in a month or so many seafood processors will be completely out of raw material and forced to curtail operations severely, if not shut down completely.

The CEO of a fishing company who is also a member of the Ca Mau Association of Seafood Exporters and Producers said his company’s shrimp processing plants are barely scraping by, constantly running out of raw materials.

Although the company farms more than 350 hectares, it is currently operating at about 30% capacity and is turning away work that it can’t handle. Many producers are paying excessive prices for what raw shrimp is available.

“However, sufficient quantities simply aren’t available at any price,” said the CEO.