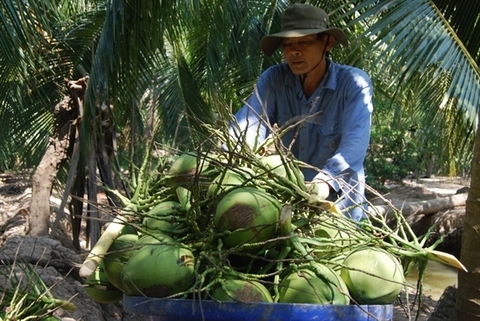 A farmers check coconuts before selling to traders in a village in Ben Tre Province. C-commerce is seen a new door for farmers and SMEs in rural areas to seek new customers.

Viet Nam has a lot of agricultural products and local specialities in high demand but most of them are still distributed through intermediary sellers and traditional markets.

Every year in Viet Nam, farmers struggle to sell their products and in some provinces, they suffer losses when the prices of their agricultural products fall due to excessive supply. Electronic commerce (e-commerce) is seen as a new avenue for them to seek new customers and even expand globally.

However, Tuan said e-commerce in Viet Nam was still in its early stages, therefore the logistics system and infrastructure were not capable of handling fresh agricultural products for farmers. For this reason, Lazada was still focusing on processed products and items with long expiration dates.

Viet Nam’s e-commerce grew more than 30 per cent in 2018 with market value reaching US$7.8 billion, according to VECOM’s statistics. However, about 70 per cent of online transactions were performed in Ha Noi and HCM City while 20 per cent were executed in Hai Phong, Da Nang and Can Tho cities.

E-commerce has a lot of potential to develop in rural areas, with 70 per cent of Viet Nam’s population living in these places, but it also needs to tackle many challenges.

“With the booming of e-commerce, people can easily start their own business online, even with a smartphone, but to sell their products effectively, they need lots of skills, not only e-commerce skills, but other skills in marketing and communication and enhancing customer experience,” Tuan said.

Tran Van Trong, chief of VECOM’s Office, said provincial authorities should promote communications on e-commerce outside these five big cities to narrow the gap of e-commerce development between the cities and other localities and between urban and rural areas.

In addition, e-commerce firms should boost online business in rural and remote areas.

In China, e-commerce companies have also begun to recognise the rural sector as having potential for prosperity.

To facilitate online purchases for people living in villages, DJ.Com received approval from China’s Civil Aviation Administration to test a drone delivery network in the northwest province of Shaanxi. It aims to build more than 10,000 drone ports in the future.

In Viet Nam, after the first Ben Tre Online Coconut Village campaign, Lazada plans to run another Day of Village Campaign in August.

“We received the request to carry out similar campaigns from industry and trade departments of other provinces of Dong Thap, An Giang and Long An. However, we will carry out this project step by step, taking into account the conditions and specialities of each province,” Tuan said, adding that the company is working with provinces to train SMEs/farmers on e-commerce skills.

A representative of e-commerce platform Shopee said it also often organised programmes to train and support sellers from countryside areas. In May, it trained e-commerce skills for almost 300 sellers in cities and provinces o Da Nang, Quang Nam, Quang Ngai and Binh Dinh.

“The programme aims to build capacity for SMEs to integrate e-commerce into their business,” he said.

However, e-commerce companies also hope to receive support from provincial authorities to be able to approach farmers and SMEs in the provinces and introduce e-commerce to them.