EC recognises Vietnam's improvements in combating IUU fishing
The European Commission’s (EC) inspection delegation has acknowledged recent improvements made by Vietnam in the fight against illegal, unreported and unregulated fishing (IUU).
Go Back 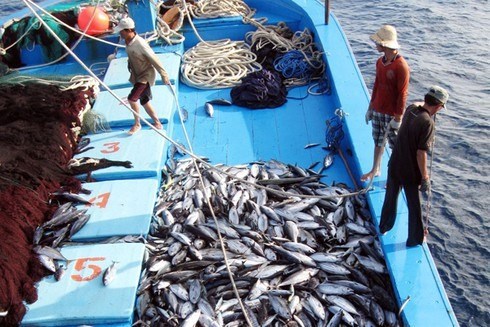 The European Commission’s (EC) inspection delegation has acknowledged recent improvements made by Vietnam in the fight against illegal, unreported and unregulated fishing (IUU). (Source: infonet.vn)

Tran Dinh Luan, Deputy Director Generalof the Directorate of Fisheries (DoF), told a press conference in Hanoi on December26 about the results of the inspection team from the EC Directorate General forMaritime Affairs and Fisheries which took place last month.

In a letter sent to theVietnamese Directorate of Fisheries on December 19, the EC’s inspection teamrecognised Vietnam’s cooperation, transparency and honesty in providing andexchanging information during their time in Vietnam.

They confirmed Vietnam has made alot of progress compared to the first inspection in May 2018 and is on theright track towards implementing the Fisheries Law and legal guiding documents.

The country’s significantimprovements in the monitoring, control and surveillance of fishingvessels have been noted, which could be seen through their on-site inspectionat Tac Cau fishing port, the busiest fish market in Kien Giang province. Inaddition, the management process and organisation of fishing vessels and outputthrough the port were carried out flexibly and effectively.

However, someshortcomings were pointed out, such as slow progress of installing cruisemonitoring equipment on fishing vessels, incomprehensive surveillance systemswith many technical errors, as well as limited and inconsistent sanctioning onviolations among localities.

There is also no evidence toprove competent authorities ensure sufficient and accurate traceabilitymechanisms in fishery processing plants, they said.

The EC also said that they will not withdraw the yellow card if Vietnam has notsolved the problem of fishing in foreign waters.

The EC’s inspection team will return to Vietnam to check on progress in thenext six months. The country must submit a comprehensive report on the resultsof the recommendation implementation by May 15 next year.

According to Nguyen Thi Trang Nhung, Deputy Director of the DoF’s Department ofScience, Technology and International Cooperation, the inspection team praisedVietnam’s improvements in building a database of fishing vessels, updatinginformation on fishing vessel licensing and planning for sustainablefishing vessel development.

Previously, Vietnam had no surveillance system at the port but now it has beenimplemented as a model in Kien Giang that has effectively controlled fishingvessels.

In the near future, the fisheries sector and localities will handle strictlyoffshore fishing vessels, especially those fishing illegally, to create a realdeterrent for violators and ships on the EC’s watchlist will face specialmonitoring./.