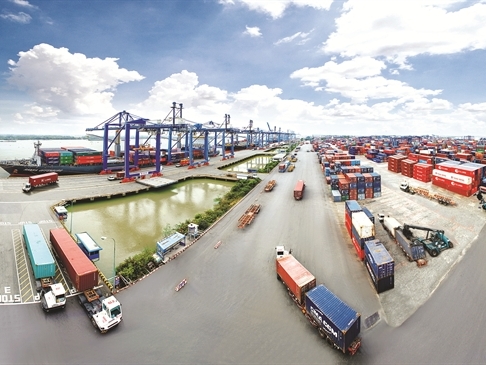 If the idea is approved by the National Assembly, the management and exploitation of ports will be determined by the ports’ management boards, not local authorities.

These will be very large corporations with an operation scale throughout the country.

Port authorities will have the right to issue stocks and bonds to mobilize capital for their projects. They will earn money from providing port services.

MOT has suggested that in the immediate time, the port authority model would be applied on a trial basis at the Hai Phong Port, a large port in the north of Vietnam.

However, economists have warned that the model may not be the magic wand to settle the existing problems at ports.

Vietnam has seen its position in the world’s transportation ranking improve in the last few years, jumping from the 90th position in 2012 to 74th out of 138 countries in 2014.

However, Vietnam ranks very low in terms of logistics services and it is just above Laos, Cambodia and Myanmar in South East Asia. This is attributed to the unreasonable port development programming.

The Cai Mep – Thi Vai Port Complex in Ba Ria – Vung Tau province built at the cost of hundreds of millions of dollars now operates at below the designed capacity of 7 million tons per annum, though it has been put into operation over many years.

This is because of the lower competitiveness of the port in comparison with other ports in HCM City and the lack of reasonable policies.

While reasonable models for port management have not been found, more and more ports have been established.

In HCM City, the international port complex in Hiep Phuoc area is under construction, which will compete with Cat Lai and Cai Mep – Thi Vai Ports in the future.

More recently, the government agreed to add the $2.5 billion project in Ca Mau province onto the list of ports to be developed in Mekong River Delta.

Meanwhile, the Can Tho Port nearby is still awaiting capital from the state to upgrade into the nation’s general port.

A question has been raised if local authorities would hand over the ports’ management right to the ports’ authorities, if the profits expected to gain from ports are attractive thanks to the increasing volume of imports and exports.

A report by the Vietnam Maritime Bureau (Vinamarine) showed that $370.3 million tons of goods went through ports in 2014, while the volume of goods going through ports increased by 11.2 percent per annum.

MOT has also been reminded that the port authority model has not succeeded in many countries, including the US.