Edible oil producers import tax cut looms
On May 10 the Viet Nam Competition Authority warned that the import tax on crude and refined edible oils, reduced from 3 per cent this month to 2 per cent, would be scrapped altogether in May 2017.
Go Back 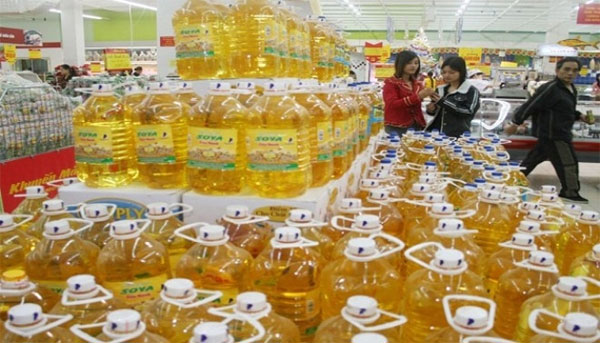 This means that the protective measures the Government has applied since 2013 to safeguard domestic oil producers from rising imports are coming to an end.

In September 2013 the Ministry of Industry and Trade decided to impose a 5 per cent import tax on refined soybean oil and palm oil after an eight-month-long investigation found that the market share of local producers had fallen from 52 per cent in 2009 to 27 per cent in 2012 even as demand went up from 100,000 tonnes to 137,940 tonnes.

Protective measures were put in place against imports.

The investigation was initiated following a demand by the National Corporation for Vegetable Oils, Aromas and Cosmetics of Vietnam (Vocarimex) and seven other producers when oil imports increased sharply.

The complainants said the increase in vegetable oil imports had led to sharp falls in domestic companies’ market share, affecting many of them.

Meanwhile, the market share of domestic producers plummeted to a mere 11.3 per cent by 2014.

The imports mostly come from Malaysia, Indonesia and Singapore.

In 2014 the market share of the State-owned Việt Nam Vegetable Oil Industry Corporation (Vocarimex), a cooking oil giant with four subsidiaries and three associated companies, fell to 4 per cent.

With its market share falling, the company has to decided to sell a 24 per cent stake to Kinh Đô Corporation and 8 per cent to VPBank Securities.

Vocarimex’s plight shows that no protective measure is enough if domestic producers do not make their own efforts to improve their competitiveness.

Analysts said the biggest problem for the domestic edible oil sector is that 90 per cent of raw materials they use are imported, mainly from Indonesia and Malaysia.

This makes their costs too high, affecting their competitiveness.

The edible oil market now is valued at VNĐ30 trillion (US$1.33 billion) and is growing at 7-9 per cent a year.

The trade ministry estimates that Việt Nam’s consumption of vegetable oils will increase to 16 kilos per capita in 2020 and 18.5 kilos in 2025, which indicates that there is massive potential for investors to exploit.

But if domestic producers do not get over their dependency on imports, the market will be ripe for their foreign rivals to take over.