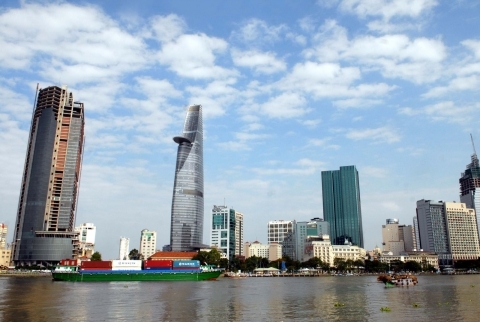 He touched on why Vietnam can be considered a hot spot and what risks and challenges there are when investing in emerging markets in Southeast Asia, including Vietnam.

Vietnam is seeing renewed interest from foreign and domestic investors, he wrote. This can be attributed to its growing economy, a property market that has reached the bottom of the cycle, and the relaxation of foreign ownership restrictions.

Vietnam signing a number of free trade agreements with the EU and ASEAN as well as the TPP further boosts the medium to long-term growth prospects.

Interest rates and inflation have fallen significantly and stabilized over the last two years, which has led to an increase in development activity in the major cities of Ho Chi Minh City and Hanoi, with many domestic and foreign developers such as CapitaLand and Keppel Land increasing construction activity, encouraged by strong sales volumes in the last 12 months.

While Indonesia grapples with relatively weak economic growth and a depreciating Rupiah, which forced JLL to downgrade its forecast for the property market in Jakarta in 2015, and Malaysia faces a backdrop of ongoing negative sentiment over domestic issues relating to the controversial investment fund IMDB and the instability of the Ringgit, Vietnam has been a hot spot for GDP, with economic growth driven by three factors: strong domestic consumption, strong private investment, and net export growth.

From the CEIC data above, retail sales growth is accelerating to 15 per cent year-on-year in Vietnam while many other Southeast Asian countries are experiencing declining or negative growth.

Emerging markets in Southeast Asia, including Vietnam, should be prioritized for investment more so than developed markets, Mr. Wyatt believes.

He pointed out that investors are willing to take part in joint venture projects / club deals in these markets, where they team up with local developers that require capital support, in order to gain an early foothold in these markets, which will experience exponential growth in the future when their economies take off.

Moreover, these emerging markets have underlying growth drivers that include population growth and accelerating urbanization rates, which investors and developers can leverage upon.

Risks in emerging markets are also inevitable, however. In the case of Vietnam, potential hurdles an investor may face include restricted access to credit for real estate development, bureaucratic systems, and especially land disputes, which continue to affect the business environment and block the fast completion of real estate projects.

These can be time consuming and costly. Red tape also surrounds land ownership, despite new laws being recently introduced to permit foreign ownership of property.

Nonetheless, JLL Vietnam sees great potential in the long-term development of Vietnam’s real estate sector, and as the market becomes more mature and evolves from a frontier market into an emerging market the legal and bureaucratic framework will improve, which will lead to considerable upside in real estate.