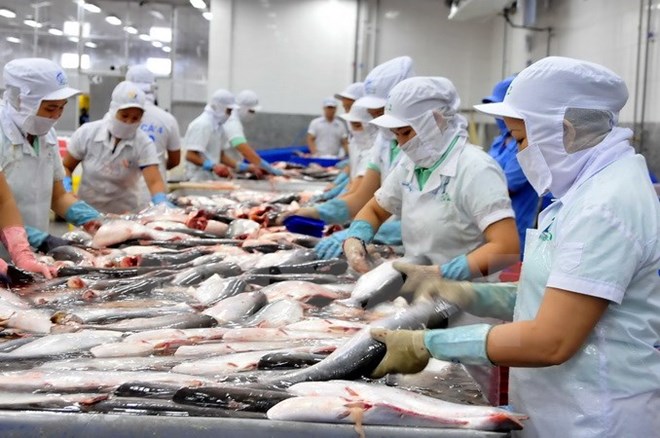 The project was financed by the European Union under the EU SWITCH-Asia Programme and implemented in the Mekong Delta from April 2013 to March 2017, with the aim of increasing the competitiveness of Vietnam’s tra fish sector in the global market, mitigating negative impacts on the environment, and promoting responsible production.

Vice President of the Hanoi University of Science and Technology Tran Van Top said the four-year-old project has supported over 50 businesses, 120 breeding areas, 130 households, and 12 cooperatives as well as attracted nearly 3,000 people to its training programmes and technical workshops.

The project focused on training farmers in how to increase the rate of living fish and reduce feed costs and pollution, thus cutting production costs by 7-10 percent. It also helped 33 breeding regions and cooperatives to receive international sustainable aquaculture certificates.

Over 70 processing factories received training in cleaner production and energy saving, thus cutting electricity costs by 18-20 percent and water usage by 26-30 percent, and reducing over 21,000 tonnes of CO2 emissions annually.

Despite having a modern production chain and most breeding areas receiving international certificates and meeting quality criteria of such choosy markets as the EU and the US, Vietnamese tra fish industry still faces the problem of smear campaigns by foreign media, which has been occurring for nearly 10 years in many countries, especially in Europe.

Thinh said the problem persists due to the sector’s slow response and poor communication activities.

The strong development of social networks also helps the adverse information spread quicker than ever among customers, while mainstream information is not readily available.

Responses in foreign languages, especially in import countries, are still limited, just only in Vietnamese and English, he added.

In fact, the demand for tra fish in Europe remains high. A survey conducted by the World Wide Fund for Nature (WWF) in 12 European countries unveiled that 86 percent of respondents said they know about tra fish products and one third of them reported to buy this product regularly.

To put an end to the smear campaign of Vietnamese tra fish, the SUPA management board has proposed building a quick information response centre on seafood market in general and tra fish in particular.