EU-Vietnam FTA still on track despite Brexit
Head of the EU Delegation in Vietnam Mr. Bruno Angelet told a press conference in Hanoi on June 28 that the Brexit crisis will not delay the implementation of EU - Vietnam Free Trade Agreement (EVFTA).
Go Back 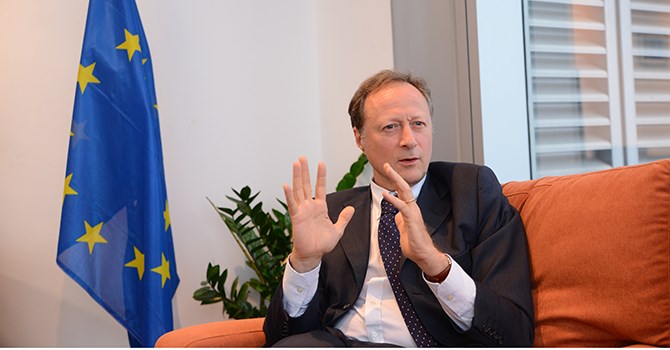 The agreement is expected to take effect in early 2018 and could increase two-way trade by 30 per cent against the 2015 figure of $57 billion.

“The FTA is in the process of being translated into many languages and the EU will keep working with the Ministry of Industry and Trade on legislation and preparations,” Mr. Angelet said.

He comments are the latest official response from the EU Delegation in Vietnam to address concerns that the FTA may be delayed due to the UK’s withdrawal from the EU.

“A delay in the EVFTA is foreseeable because it has not been approved by the EU Parliament,” economist Le Dang Doanh was quoted as saying on June 24 – the day the UK voted Leave. “It will be time consuming to amend clauses due to Brexit.

The short-term plan for Vietnam is to not let the currency fluctuation have a negative impact on the whole economy.”

Vietnam recorded a trade surplus with the UK of $3.9 billion in 2015 and $1.7 billion in the first five months of 2016, according to the General Statistics Office (GSO).

Economist Nguyen Xuan Thanh from Fulbright Economic Teaching Program suggested that both the EU and Vietnam could allow the UK to participate in the FTA as a third party.

Two-way trade between Vietnam and the EU in the first quarter of 2016 was $9.86 billion, or 13 per cent of Vietnam’s total trade, according to the GSO.

“We are going to review all of the impacts of Brexit on tariffs and on Vietnam’s trade industries,” GSO Director-General Mr. Nguyen Bich Lam told a press conference on June 27.

“It is too early to evaluate the impact of Brexit but the UK is not a significant destination in terms of trade and investment,” he added.

“There will therefore be no significant impact in the short term.”

Minister of Planning and Investment Nguyen Chi Dung also believes the impact will be minor.

“The UK in particular and the EU in general have not become major destinations in terms of trade and investment, so Brexit will not have a direct impact on Vietnam’s economy,” he said.