Experts see stable prices in 2018
Economic experts forecast prices would be stable in 2018 and might even see a slight decrease, with inflation under control.
Go Back 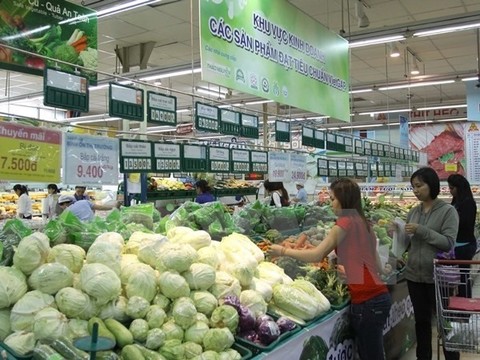 The market anticipates no unexpected price shocks this year, said Nguyen Tien Thoa, chairman of the Viet Nam Valuation Association. He, however, stressed that a close watch must be kept on factors, which might be disadvantageous to inflation control.

Thoa said prices of global commodities tended to increase, such as oil, gas and coal, which might affect domestic prices, in addition to expanding credit growth, exchange rates and impacts of an increase in power prices, wages and other goods set by the State, as well as unpredictable natural disasters and diseases.

Thoa said that attention must be paid to controlling inflation from the first months of this year. “It is critical to ensure an adequate supply of goods, to cut costs (including production costs, interest rates and road fees) and to have an appropriate roadmap for a government-set increase in prices,” he said.

“The root of inflation must be handled: it is economic restructuring, renovating the growth model, improving productivity and stabilising the macro-economy,” he said.

Economic expert Ngo Tri Long said that the price increase of several public services and foods would insert pressure on inflation, but the government’s inflation of below 4 per cent in 2018 would be within reach.

Sharing the same viewpoint, Nguyen Ngoc Tuyen, from the Academy of Finance, forecast that inflation could be at 3-3.5 per cent this year.

According to the National Financial Supervisory Committee, if there were no sudden developments, inflation in 2018 would be below 4 per cent. However, inflation might rise if power prices were hiked significantly, the committee said, estimating that an 8-10 per cent increase in electricity price would increase inflation by 0.1-0.15 percentage points.

Still, Viet Nam should not focus too much on growth figures, but pay more attention to growth quality and growth model renovation, according to Nguyen Duc Thanh, Director of Viet Nam Institute for Economic and Policy Research.

“Viet Nam needs to focus on restructuring the economy, in line with renovating the growth model and creating a strong domestic business community, which is capable of competing in the integration progress,” he said.

Thanh said there was still significant room for growth, such as boosting the State-owned economic sector, disbursement of public investment, developing the private sector and foreign direct investment.

To achieve an average growth rate of 6.5 per cent in 2016-20, Thanh said the country should continue hastening institutional reforms, improving the business climate and enhancing productivity. “This will create a long-term impetus for growth,” Thanh said.