Facing TPP dairy deluge, Vietnam milk firms shift strategy to survive
Vietnam's fast-growing dairy companies are investing big in new markets as they brace for stepped-up competition at home from global giants on the prowl to take advantage of a Pacific trade pact.
Go Back 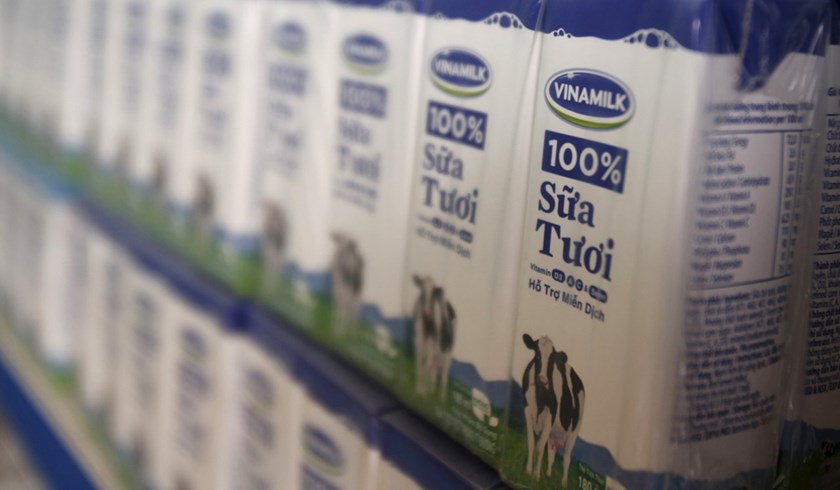 Vinamilk’s products are seen at a shop in Hanoi, November 3, 2015. Photo: Reuters/Kham

Vietnam’s fast-growing dairy companies are investing big in new markets as they brace for stepped-up competition at home from global giants on the prowl to take advantage of a Pacific trade pact.

Domestic milk demand is soaring as household spending power increases in the country of 90 million people, boosting profits for dairy firms that are expanding quickly, but can meet only a third of the milk needs.

That’s leaving a void that giants like New Zealand’s Fonterra and Canada’s Saputo could fill with new products and lower prices once the U.S.-led Trans Pacific Partnership (TPP) comes into play, eliminating tariffs among 12 markets worth 40 percent of the global economy, and nearly three-fourths of Vietnam’s dairy imports.

It is the flip-side of the communist country’s aggressive drive to outpace Southeast Asia in getting preferential access to the world’s biggest markets for its swelling electronics, textiles, seafood and commodities output.

Trade liberalization would strengthen a vibrant economy set to grow to $200 billion this year, but foreign competition from the TPP could deal a heavy blow to local firms that lack capital and expertise and are unfit to join supply chains. According to private estimates TPP would add 15 percent to Vietnam’s economy up to 2025, compared to less than 2.2 percent for Malaysia and Singapore.

That would further burnish an economy that has grown at a rapid 5 percent-plus clip over the past 15 years.

Vietnamese diary firms, bracing for stiffer competition, are seeking to expand overseas and utilize non-TPP trade deals, or find niche markets at home to navigate the pitfalls of the biggest trade pact in a generation.

On top of ploughing $1.2 billion into domestic projects, TH recently announced $2.7 billion of investment into cow farms, milk plants and distribution channels in Russia, which has a dairy shortage and is squeezed by European Union sanctions over its military intervention in Ukraine.

“The Vietnam market has much potential, and so too Russia,” Trang added.

According to local VPBANK Securities, which cites Euromonitor, the Vietnam dairy industry was worth $2.8 billion in 2013 and may have grown to $4.1 billion this year.

Vietnam’s top listed company by capitalisation, Vinamilk is also looking abroad, though incrementally, with an initial $30 million into the United States, New Zealand and Cambodia and $3 million in Poland, aiming to eventually use it as a gateway to the EU, with which Hanoi has concluded a free-trade agreement.

Vinamilk’s strong prospects have put it on foreign investors’ radars and the government’s recent decision to divest its 45 percent stake sent the stock to an all-time high on speculation that second-biggest shareholder Fraser and Neave would snap up the state’s holdings for $4 billion.

Vinamilk’s shares have risen about 60 percent this year and the company’s value has increased 10 times over the past decade to $6.8 billion. Net profit last quarter rose 55 percent from the same time in 2014 to $95 million, while revenue overseas increased 44 percent annually to $264 million during January-September, compared with just 10 percent at home.

Conglomerate Hoang Anh Gia Lai is keen to tap the diary demand at home and this year listed a $1.1 billion agribusiness unit that’s larger than its parent and predicts cows would deliver about half the group’s 2015 revenue.

Those unable to evolve face a bleak future from TPP, not just in dairy, but multiple sectors across Vietnam’s fast-growing but already heavily foreign-invested economy.

“There were times people poured milk on the road rather than sell at low prices,” said Dang Thi Thu Huyen, who traded pigs for cows she thought would be lucrative.

“I’m not sure I can hold on for much longer. I was already late to the game.”