Farm exports face challenges as exporters put all eggs in one basket
The rapid increase in exports to one market may force Vietnam to face anti-dumping lawsuits, while large exports to China will bring risks as this is an unsafe market.
Go Back 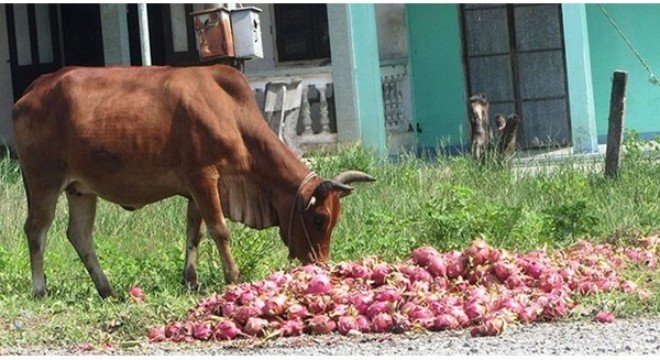 Dragon fruit is one of Vietnam’s major export items. Vietnamese farmers, encouraged by initial profits, have been trying to expand the dragonfruit growing area. The fruit has been grown in 32 provinces and cities, but the largest areas are seen in Binh Thuan (20,000 hectares), Long An (20,000 hectares) and Tien Giang (3,000 hectares).

The dragonfruit growing area has been increasing sharply in the last two years, making farmers and merchants rich.

However, analysts have warned that the uncontrolled expansion of the growing area will lead to high risks.

“The reliance on one market is really worrying and it cannot ensure the sustainable development,” an analyst said. “What will happen if China suddenly stops buying dragon fruit?”

In the past Vietnamese farmers had to throw hundreds of tons of dragonfruit away or feed cows with fruit as the selling price was so low that it could not cover the production cost.

Meanwhile, local newspapers reported that China has developed 20,000 hectares of dragonfruit, which has raised worries among Vietnamese management agencies, scientists and farmers.

However, despite warnings about the unstable Chinese market, Vietnamese still prefer exporting dragonfruit to China, as it does not set strict requirements on quality.

Only 3 percent of dragonfruit is exported to the US, 4 percent to the EU and 1.5 percent to Japan

Doan Huu Duc, chair of VCG, a consultancy firm, noted that Vietnam has been exporting products as raw materials. Therefore, though being the leader in exports of rice, coffee, cashew nuts, shrimp and fish, it cannot earn enough money.

“Vietnam’s tra fish association’s head once complained that even when Vietnam accounts for 70 percent of the world market share, the association dare not dream of controlling the price of the products to avoid anti-dumping lawsuits,” he said.

Food safety control is also a headache for Vietnam’s agricultural production, which is described as the ‘Achilles’ heel’ of Vietnam’s products that want to become international brands.

Vietnam has to step by step ease reliance on the Chinese market, and in order to do that, it needs to overcome technical barriers set by import countries.