Farmers, exporters of coffee hit by drought
Drought and natural disasters have caused severe damages to the 2015-2016 coffee crop and left after effects for the next group.
Go Back 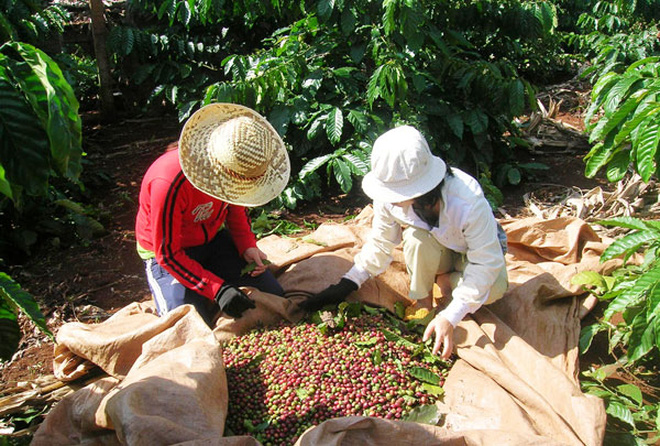 “The coffee industry has never met such big difficulties before,” said Nguyen Viet Vinh, secretary general of the Vietnam Coffee and Cocoa Association (Vicofa), talking about the coffee export recently.

Since October 2015, when the crop began, farmers in five provinces in the Central Highlands, the most important coffee growing areas, have been facing the most severe drought in the last three decades.

Dak Lak province is the biggest sufferer from the drought, followed by Gia Lai, Lam Dong and Kon Tum. Of the total 165,000 hectares of industrial crops in the areas, there are 110,000 hectares of coffee and 40,000 hectares have withered because of the lack of water.

However, the coffee export still has obtained certain growth. According to the General Department of Customs (GDC), Vietnam exported 983.891 tons of coffee in the first six months of the year, earning $1.707 billion, increasing by 39.6 percent in quantity and 17.8 percent in value.

Explaining the coffee export increase, Vinh said that exports included products made in 2015. Also, the export price has moved up to VND37-38 million per ton on short supply in the world market, because Brazil, the biggest coffee exporter, has also suffered from an output decrease.

While farmers had to struggle with the drought, coffee exporters were concerned because the State Bank instructed commercial banks not to lend in foreign currencies.

Since coffee exporters could not access cheap capital (dollar loans always have lower interest rates than dong loans), they could not compete with foreign rivals.

According to Nguyen Nam Hai, deputy chair of Vicofa, foreign companies have been dominant in the domestic coffee material market. The companies can borrow foreign currencies from banks at low interest rates, then convert into dong to collect materials in the home market.

However, the problem will be solved as the State Bank has agreed to resume the lending in foreign currencies. The State Bank’s move has been described as ‘a lifebuoy’ for coffee exporters.

When asked about the coffee export plan in 2016, Hai said the export volume in the year may be a little bit higher than 2015.