FIEs try to cope with labor problems in Vietnam
The minimum wage increase, a lack of highly qualified personnel and strict regulations on extra working hours all have been cited by foreign invested enterprises (FIEs) as problems they are facing.
Go Back 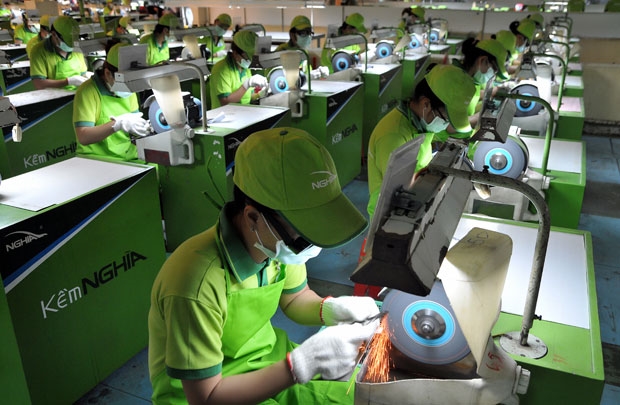 The minimum wage increase should be considered based on the inflation rate, unemployment rate and expected GDP growth rate

Shimon Tokuyama, chair of the Japan Business Association in Vietnam (JBAV), noted that the minimum wage has increased by 15.1 percent, much higher than the consumer price increase.

He said at the Vietnam Business Forum held some days ago that the minimum wage increase should be considered based on the inflation rate, unemployment rate and expected GDP growth rate.

The Korean Chamber of Commerce (KoCham) also thinks that the minimum wage in Vietnam has been increasing rapidly, by 10-15 percent per annum.

KoCham represents South Korean investors who have poured a total of $25 billion worth of capital into the country.

Korean businesses have also complained about the unreasonable regulations on extra working hours, which they say have led to higher labor costs.

The problem lies in the 2012 Labor Code which stipulates that the total number of extra working hours must be no more than 30 hours a month. With the fixed number of working hours, businesses find it hard to implement their production plans in high production seasons.

KoCham warned that the inflexible regulations on extra working hours could cause foreign investors to hesitate to come to Vietnam.

A report by Navigos Search released recently showed the challenges FIEs are facing in looking for Vietnamese medium- and high-end personnel.

Forty one percent of polled businesses in Vietnam said they could not find enough personnel in the last 12 months to fill mid- and high-end positions.

Most of the surveyed FIEs said English skills are one of the three most important requirements when seeking managers.

Meanwhile, in Singapore, English skills are considered a requirement for key personnel.

However, in Japan, where English skills are not as highly valued, 61 percent of surveyed businesses said they were satisfied about the English skills of Japanese managerial staff.