Fisheries industry sets export target of $10 billion
The fisheries sector has set itself an export target of US$10 billion this year, the target set by the Government only for 2020, according to the Viet Nam Association of Seafood Exporters and Producers (Vasep).
Go Back 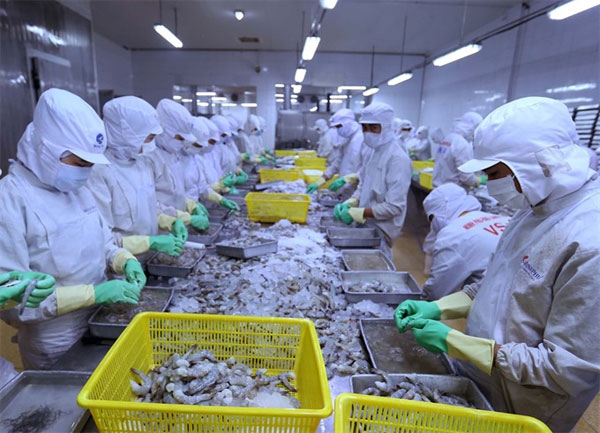 A shrimp processing factory in Hau Giang Province. Fisheries exports are expected to top US$10 billion this year, a target the Government set only for 2020. — VNA/VNS Photo

Speaking at a conference to discuss export plans in HCM City on Saturday, Vasep chairman Ngo Van Ich said exports last year had been worth $9 billion, a year-on year increase of 6 per cent, and met the target.

Tra fish exports had surged 26 per cent to $2.26 billion thanks to increased buying by the US and China and the recovery of the EU market, he said.

But shrimp exports were down 8 per cent to $3.6 billion due to a drop in demand in a number of markets such as the US and Canada and higher production by competitors like India, Indonesia and Thailand, resulting in a 15-20 per cent fall in prices, he said.

Last year had also been difficult for the industry after the EC imposed a yellow card warning on Vietnamese seafood for failing to make progress in fighting illegal, unreported and unregulated (IUU) fishing, he said.

But things would look up this year, he said.

“Exports increased by just 6 per cent last year, rather low considering the sector’s capacity. The sector can absolutely achieve growth of 10 per cent and even 12 per cent a year if it is developed in the right direction.”

With its potential and preferential tariffs from free trade agreements, including the Comprehensive and Progressive Agreement for Trans-Pacific Partnership, the sector would achieve exports of $10 billion this year, he said.

“In 2019 shrimp exports are expected to be better because the US Department of Commerce recently announced the final results of the 12th period of review (POR 12), lowering the anti-dumping tariff on shrimp imports from Vietnam.”

The sector would also work to get the EC yellow card warning lifted this year, he said.

But the many positive signals notwithstanding, the sector also faces many challenges in terms of raw materials, competitiveness and market barriers.

“Actively sourcing raw materials is always an advantage to businesses, but this is not being done well.”

Climate change, saltwater intrusion in rivers and diseases are some of the reasons causing a shortage of raw materials while the anti-dumping duty imposed by the US and its Seafood Import Monitoring Programme have also created pressure on businesses, according to Hoe.

Raw shrimp prices are higher than in other countries in the region and other input costs have also increased, affecting Vietnam’s competiveness.

Ich and Hoe agreed that to achieve the targets the sector would need a specific development strategy with a focus on preventing shrimp diseases, stopping the use of chemicals in aquaculture, capitalising on preferential tariffs under the Viet Nam-EU FTA, which takes effect this year, to boost exports to the EU, and importing legal seafood materials for processing for export.

Minister of Agriculture and Rural Development Nguyen Xuan Cuong hailed the export efforts last year, but said the target of $10 billion for this year would be very high despite having a firm foundation to achieve it.

Shrimp exports were looking up, tra fish was popular in many markets and seafood exploitation was gradually becoming sustainable.

To accomplish the export target, stakeholders in the fisheries value chain from the exploitation and processing stages to distribution and exports needed to further enhance co-operation and improve the management at each stage.

The exploitation and production of raw materials had to follow clean processes and comply with input quality standards while the processing phase had to improve technology and management to reduce production costs.