Foreign firms take interest in Vietnamese restaurant chains
A number of Vietnamese food chains have recently received millions of dollars worth of investment from foreign funds.
Go Back 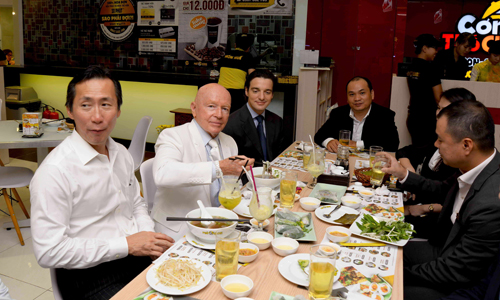 The project on starting up business with KAfe Group café chain initiated by Dao Chi Anh, a cook and businesswoman born in 1984 has caught the special attention from the public as it has received a $5.5 million investment from Cassia Investments, a fund from Hong Kong.

Anh said she will use the amount of money to open 26 shops in Hanoi and HCM City this year. The young businesswoman also plans to buy some farms to build a supply chain – an ecosystem existing from farm to dinner table.

The billionaire revealed that he heard about the food chain through a consultancy firm. After negotiations in Singapore, he decided to pour capital into the chain, affirming that he will provide more capital to Huy Viet Nam when it needs it.

Huy Nhat, the owner of the chain, which owns three brands Mon Hue, Com Express and Pho Ong Hung, said Franklin Templeton is one of the five biggest investors. The other four are from Singapore and Hong Kong.

Golden Gate, which runs Kichi Kichi, Sumo BBQ, Ashima and Vuvuzela, was believed to be the first food chain that received capital from an investment fund – $2.9 million from Mekong Capital in 2009. Later, Standard Chartered Private Equity, belonging to Standard Chartered, spent $35 million to take over the stake.

Declining to reveal the amount of profit, Mekong Capital said the latest divestment brought the gross internal rate of return of over 40 percent.

A branding expert in HCM City commented that investment funds now eye Vietnamese food chains because they understand the great potential of the food sector in Vietnam. This is why foreign investors have come to Vietnam to develop food chains of their own such as Tokyo Deli, Coca Suki, Sakura and Oshima.

He noted that food chains rarely are hurt by recession because they can satisfy people’s essential demand. Therefore, the food sector has always been eyed by foreign funds.

According to Do Thanh Nam, chair of Win-Win, a consultancy firm, in the food sector, the expenses just account for 40-50 percent, while the gross profits are very high, at 50 percent.