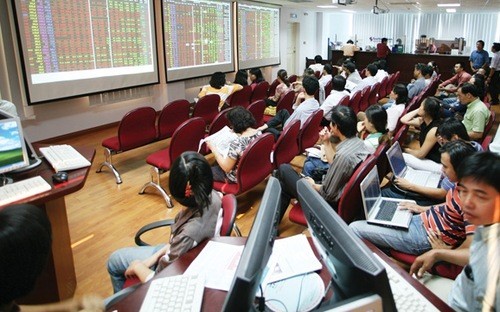 With many bustling trading sessions, the average liquidity on the HCM City and Hanoi stock exchanges (HOSE and HNX) reached VND3,100 billion ($139 million)/session on average in July.

The VN-Index also broke the threshold of 640 points to reach the highest level since 2008. At times the index hit almost 681 points.

Ending the last trading session in July, the VN-Index jumped from 632 to 652 points, representing a 3% increase.

There were a total of 21 trading sessions in July on the HCM City Stock Exchange (HOSE). Foreign investors made only 3 selling session and 13 purchasing sessions, with nearly 64 million shares, worth VND1,197 billion ($53.6 million), over nine times higher than VND131 billion ($6 million) in June.

The shares that were strongly purchased by foreign investors include HPG of Hoa Phat Group, PVT, PVS, and VND while those of strong sales are SHB, VNM, MSN, and VNR.

Securities experts have said that Vietnam’s stock market has been in a rising trend since 2012.

The HCM City Securities Trading Company (HSC) forecasts that the VN-Index will reach 700 point at the end of 2016.

Currently, in addition to public debt problems, the macroeconomic signals of Vietnam are pretty good; its GDP growth is a bright spot in Asia. The P/E of the stocks in Vietnam is still lower than that of other countries in the region.