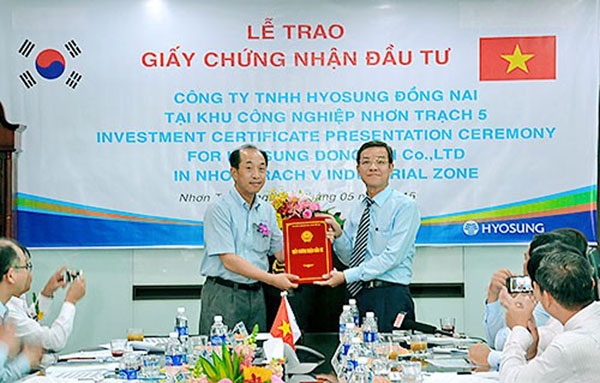 South Korean Hyosung Group, after two years of preparation, has increased its investment capital to $660 million

Businessmen from Japan, Singapore, India, the US, UAE, Thailand and China have come to Dong Nai province, where they hope they can develop industry, service, agriculture, real estate and tourism projects once the Long Thanh International Airport is built.

In late May 2015, Singaporean Consulate General in HCM City Leow Siu Lin had a working session with the Dong Nai provincial People’s Committee, in which she said Singaporean aviation service companies wished to have opportunities to invest in the airport project.

Also in late May, a group of businessmen from UAE also came to Dong Nai, expressing their wish to invest in infrastructure items for the Long Thanh Airport.

In late 2014, Japanese, French and American businesses, through their diplomatic agencies in Vietnam, also showed willingness to cooperate with Vietnamese partners to develop Long Thanh Airport.

“Once Long Thanh becomes operational, it will be like a sponge attracting industries and services,” an analyst said. “Long Thanh will need many things except runways and terminals. It will also need service areas, new urban areas and many kinds of services to help operate the airport.”

South Korean Hyosung Group, after two years of preparation, has increased its investment capital to $660 million, or VND14 trillion, in Nhon Trach IZ in Dong Nai province, in anticipation of the opportunities to be brought by the Long Thanh Airport in the future.

Amata Thailand is reported negotiating with the Dong Nai provincial authorities on its plan to pour $400 million into the province to develop a high-end complex named Long Thanh City.

Morikawa Akira, the center’s general manager, said that favorable transportation conditions and the advantageous position – near the seaport and Long Thanh Airport in the future – is the reason he chose the place for the new logistics center.

He said imports and exports were mostly shipped by sea, but sometimes goods owners require air transport. Therefore, it would be better to choose a place near an airport to set up a logistics center.