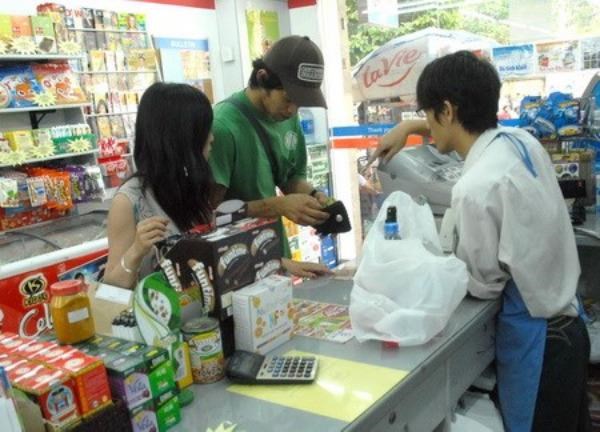 With the growing spending power of middle class consumers, the Vietnamese retail market is in need of new and modern outlets. And for many investors, the race has begun.
Vietnamese conglomerate Vingroup is expected to hire 10,000 employees to serve its expansion of supermarkets and convenience stores this year.

The company says it will launch about 50 supermarkets and 360 convenience stores.

But it is foreign investors that are driving the growth of the local convenience store market.

In February, US chain Circle K opened its 100th outlet in Ho Chi Minh City. It has planned to launch 150 convenience stores in Vietnam this year, securing its position in the country.

Singaporean Shop&Go has opened 126 stores since its arrival in 2005, becoming the leading convenience store chain in Vietnam.

More competition is expected as 7-Eleven, a major Japanese company, has also announced plans to enter the market in 2017.

Dinh Thi My Loan, chairwoman of the Association of Vietnam Retailers, said convenience stores expand in the context that local people, with higher income, have a stronger demand for higher quality of goods and services, compared to a few years ago.

They often opt for convenience stores instead of small grocery shops and traditional markets for their shopping, Loan said.

According to a recent report of Nielsen, consumers have shifted away from wet markets and traditional trade stores in recent years.

Meanwhile, the need for convenience stores continues to grow, especially in urban areas in Vietnam.

On Pham Ngu Lao Street in Ho Chi Minh City’s District 1, Shop&Go, Circle K, B’s Mart stores are only a few steps away from one another.

Nielsen attributed the growth in a large part to the increase of “time-poor and predominantly young shoppers” in the country.

“Consumers are increasingly demanding products and solutions that help them in their increasingly busy life,” Vaughan Ryan, Managing Director of Nielsen Vietnam, said.

“As a result we will see the emergence of both the convenience channel and e-commerce in Vietnam, to meet this consumer demand.”

Investors could gain profits easily because rents are cheap, around $9 per square meter. The rate for a good site to open a supermarket may cost ten times more, he said.

With a relatively small outlay of just around $10,000 to $20,000, it also takes less time for investors to break even with a convenient store that can carry up to 2,000 items of goods, he said.

Vietnam has a 90 million population and the size of its middle class is expected to double by 2020, owing to annual economic growth of over 5 percent since 2000.

Nguyen Huong Quynh, head of Nielsen Vietnam, said there is one convenience store or mini-mart for every 21,000 residents in China, and one for 1,800 in South Korea.

Meanwhile, the ratio in Vietnam is one per 69,000 residents. The number of convenience stores and mini-marts needs to triple to meet the demand, she said.

Despite bright prospects for convenience stores in Vietnam, their development is not always smooth.

This could be seen from the case of a joint venture between Ministop, an affiliate of Japan’s second largest retailer AEON, and G7, an arm of local coffee producer Trung Nguyen.

They aimed to develop 500 convenience stores called G7 Mart-Ministop across the country within five years from 2011.

However, their partnership ended early this year, after only 17 stores had been opened.

The venture has reportedly failed to reach the target because of difficulties in finding premises in Hanoi and Ho Chi Minh City.

Commenting on the reasons for the end of the partnership, industry insiders said the two sides have committed that the stores would sell only locally produced goods. As a result, their stores have failed to ensure an abundant supply of products and offer competitive prices, according to local media.

Industry insiders have also confirmed that foreign retailers are dominating the market. Ho Chi Minh City alone has some 500 convenience stores, most of which are foreign-owned.

An industry insider said most retailers in Vietnam are suffering losses, but their goal is to stretch influence by any means.

Losses may prove a problem for local firms, who often are short on capital and cannot compete against foreign chains with deep pockets.