Foreign retailers expand business, meet few barriers in Vietnam
Foreign retail chains have been expanding their networks under the cover of domestic retailers.
Go Back 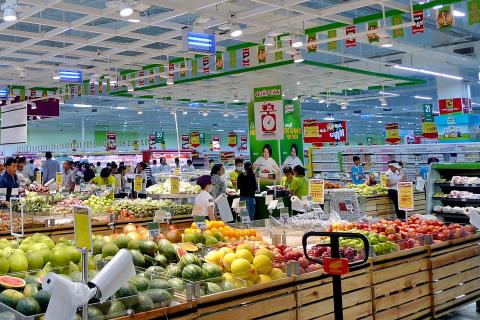 Vietnamese retailers have repeatedly shouted for help in recent days, saying that they have to compete fiercely with foreign retail chains, while the barriers to protect domestic retailers cannot help.

The HCM City Business Association has sent a dispatch to the Prime Minister, asking to apply urgent measures to create more favorable conditions for Vietnamese retailers to develop.

According to Pham Ngoc Hung, deputy chair of the association, in theory, ENT (economic needs test) is considered an instrument for Vietnam to control the foreign retail network expansion and protect Vietnamese retailers.

In principle, Vietnamese agencies have the right to refuse the proposals by foreign retailers to open second and subsequent outlets, if ENT shows that there is no need to open more outlets in the same localities.

However, since there are still no detailed regulations, every province and city follows its own way in applying ENT.

Meanwhile, the ENT barrier will not be applied to retailers from slcertain countries.

Jana Herceg, deputy head of the Economics and Trade Section at the Delegation of the EU to Vietnam, said Vietnam committed not to apply ENT mechanism to the retailers from EU, five years after the Vietnam-EU Free Trade Agreement (FTA) takes effect.

Analysts have warned that the non-ENT mechanism applied to retailers from the EU may be exploited if non-EU retailers register their business in any EU countries, from which they will make investment in Vietnam.

A branding expert said foreign retailers can also easily expand their networks in Vietnam through merger and acquisition (M&A) deals, because Vietnamese agencies seem to be very ‘open’ in this field.

“Foreign retailers, with powerful financial capability, can take over existing domestic retail chains and by doing this, they can have large retail networks,” he said.

Meanwhile, Vietnamese retailers have been told not to rely too much on the technical barriers set by the state. In order to fight the fierce competition, domestic retailers must upgrade.

Chair of the Hanoi Supermarket Association Vu Vinh Phu said Vietnam has lost more than a half of the modern retail marketto foreigners’ hands, warning that if domestic retailers lag behind in the race, they will be swallowed up by foreign retailers.