Freight reduction urgent to improve Vietnamese goods’ competitiveness
Logistics costs in Vietnam account for 20-25 percent Gross Domestic Product (GDP), which is 10 percent higher than other developing nations in the region, the association said.
Go Back 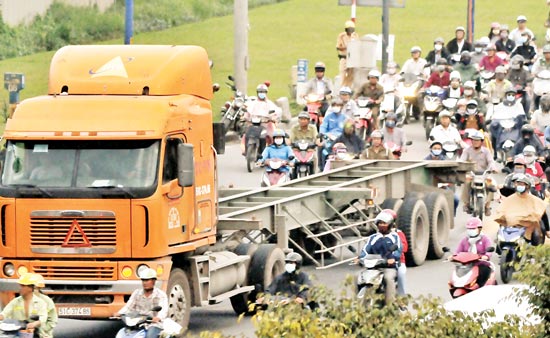 Chairman of HCMC Cargo Transport Association Bui Van Quan said that the use effectiveness of transport means in Vietnam is not high, citing up to 50 percent of trucks have regularly run empty on their return journeys. The rate reduces to 40 percent during holidays.

That is because transport firms have operated separately and locally and the supply of transport means has been higher than demand, according to Mr. Quan.

Traffic infrastructure has also contributed to issues of the transport industry. Most roads in Vietnam are small and permit travel of many types of vehicles, lengthening transport time. Permissible load limit is low. Vehicles have regularly got stuck in hour long traffic jam when entering urban areas such as HCMC and Hanoi. All these reasons have pushed up transport fees.

In addition, many major highways have been built but attracted a limited number of trucks because of high toll fees.

Railway stations, seaports and airports have not been well connected with industrial parks and production zones of export import commodities.

Chairman of Hoa Sen Group Le Phuoc Vu said that the group and many other companies have built their plants in Phu My Industrial Park, which is 80 kilometer away from seaports in HCMC, tripling transport fee.

Most export and import goods from the Mekong Delta have been carried by road to reach seaports in HCMC and Ba Ria-Vung Tau province, which Minister of Transport Dinh La Thang said raise costs by hundreds of millions of U.S. dollar a year.

In Vietnam, road transport is holding up to 80 percent of cargo transportation. Meantime, waterway and railway that have lower freight rates than road are under restructuring after a long time on a slow-go.

Vietnam has a thick system of rivers and canals, creating advantageous conditions for waterway development. However this type has not been effectively exploited and invested synchronously.

Last year, the Ministry of Transport launched a coastal transport route from the northern province of Quang Ninh to the Mekong Delta province of Kien Giang to reduce pressure on road system. After one year of operation, it has transported over 5.3 million tons of cargo with freight rate accounting for only 20-30 percent of road transport charges.

The ministry has also implemented a number of dredging projects to open important waterway routes. It is speeding up a navigation channel project to permit large vessels to enter Hau River in the Mekong Delta region to load export goods.

Similarly, railway industry has been reshuffled. However its too old infrastructure has caused the ministry’s efforts fail to gain results as expected. Vietnam’s rail system has been built for a century with 1 meter gauge track and many sections have only a single rail lane.

Railway now assumes about 1 percent of the country’s cargo transport demand. So modernization of the industry and construction of roads linking with its stations is an urgent requirement to develop this type of transport.

Airway has made strong development steps with growth rate approximating 20 percent a year, according to the Vietnam Logistics Businesses Association. However high transport fee is this industry’s specific characteristic.

The association hopes that airway haulage will reduce to facilitate Vietnam’s export of fresh items such as fruits.

According to initial plan, relocation of seaports from Ho Chi Minh City’s center areas must complete five years back, forming Cai Mep-Thi Vai international seaport complex in Ba Ria-Vung Tau province and Hiep Phuoc complex in HCMC. However the plan has been adjusted many times lengthening its progress.

The seaport system in HCMC, Ba Ria-Vung Tau and Dong Nai plays a significant role as it has assumed up to 40 percent of the country’s export import goods volume. So it is necessary to speed up relocation of the seaports and construction of infrastructures connecting with the complexes.

Amid international integration, measures to reduce transport fees should be carried out immediately to improve Vietnamese goods competitiveness, which is a heavy pressure but an urgent task to the transport industry.