French firm wants to get involved in financial center project
HCMC - French company Vinci Construction is looking for approval from the HCMC government to partner with Malaysia’s Berjaya Corporation to build a financial center in District 10.
Go Back 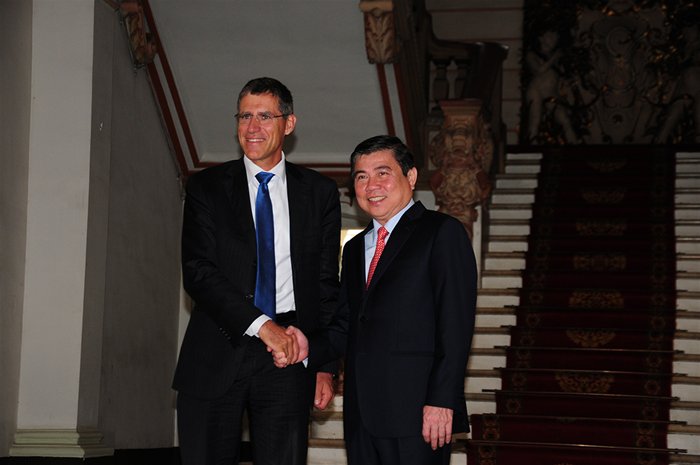 At a meeting on October 5 with HCMC chairman Nguyen Thanh Phong, Jerome Stubler, chairman of Vinci Construction, said the French group has been operating in Vietnam for 20 years and has opened an office in HCMC to design infrastructure projects.

Aside from the financial center, Vinci Construction may get involved in public infrastructure and environment projects in the city, Stubler said.

Berjaya got the city government’s nod to build the financial center in 2008 at a cost of US$930 million, but the project has yet to get off the ground. The center would cover nearly seven hectares at the corner of Cao Thang, Le Hong Phong and Ba Thang Hai streets and consist of four 48-floor buildings, with one of them planned to operate as a five-star hotel.

Vinci Construction has cooperated with Berjaya in many projects in Malaysia over the years, Michel Oliveres, Vinci’s director for Southeast Asia, told the Daily on the sidelines of the meeting.

For the Vietnam financial center, Vinci Construction wants to help Berjaya design, build and seek investment for the project.

HCMC chairman Phong said the city government is calling for investments from both local and foreign enterprises to develop waterways and roads as its population growth has outpaced infrastructure development.

The city plans to develop seven metro lines. However, the city has been able to start work on Metro Line No.1 and is still seeking investment for the remainder.

Vinci Construction was encouraged to take part in other fields such as waste treatment, flood control and water drainage.

Phong said the city discharges 7,500-8,000 tons of waste a day but most of the volume is buried. Therefore, the city is finding investors that have advanced technologies turning waste into energy.