Frenchman Rehahn launches “Giving Back” project
French photographer Rehahn, who has been residing in the ancient town of Hoi An in the central coast province of Quang Nam for seven years, has unveiled a “Giving Back” project designed to improve the lives of the characters in his photos who are in poor rural areas of Vietnam.
Go Back 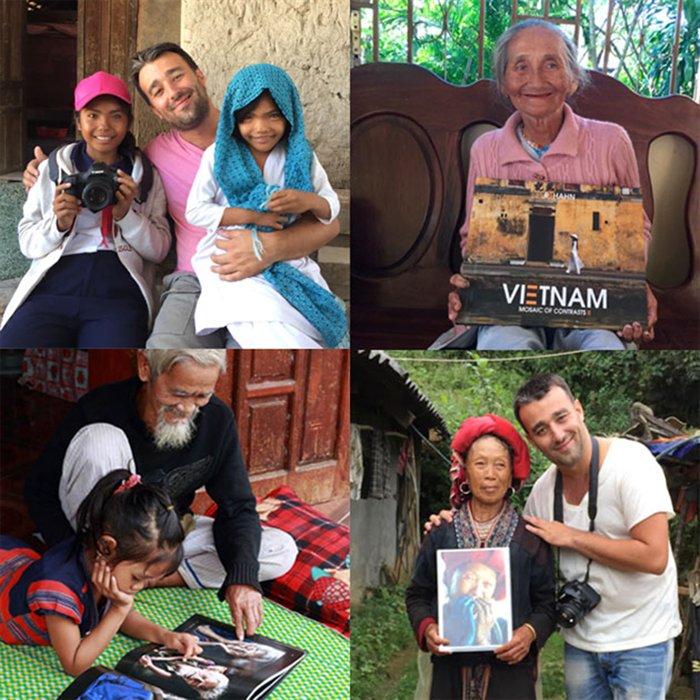 French photographer Rehahn and characters of his photos – PHOTOS: COURTESY OF REHAHN

Rehahn told the Daily that he is a true believer in karma and “what goes around comes around.” This word and its meaning carry special weight in Réhahn’s journey as a photographer. When a photo is taken, framed, displayed in the gallery and admired by many, the journey for Réhahn is still not complete.

He goes one step further and retraces his steps back to the village. He sets out to find the person featured in his photo and then gives him/her a gift to enhance the quality of his/her life. And in so doing, the circle of karma is closed.

The idea of giving back has become Rehahn’s philosophy. The 37-year-old, who was recently ranked #2 and #50 in the lists of top photographers in France and the world respectively, said that photographers have an opportunity to take on some social responsibility by giving back to those who have influenced their work. He feels this with all his heart and hopes to set an example so that everyone’s lives are left a little better than before.

The project’s idea started with Mrs. Bui Thi Xong, a 74-year-old boat rower on Hoai River in Hoi An who had a meeting with Rehahn in the summer of 2011 when he came to the town as a tourist. Mrs. Xong’s photo was featured on the cover of Réhahn’s first successful book “Vietnam, Mosaic of contrasts” and later she was featured in a different project called “Hidden smile”.

Since then she has been popular with more than two hundred articles published worldwide. After the first successful book with 1,000 copies sold in 29 countries, Rehahn returned and bought Mrs. Xong a new boat as her humble dream was to own a new boat to make a living.

Rehahn has also shown his care to An Phuoc, a little Champa girl with her blue eyes living in a poor family in the central coast province of Ninh Thuan by buying new clothes, a bicycle and a cow for her family. He also called on the community to help donate clothes and money to help ethnic minority children in Sapa and many kind-hearted acts to many characters from his photo collection.

The artist has a passion to inspire other photographers to join the “giving back” movement to spread the spirit of love and caring and to make life better for people in need.