Frontier Vietnam eyes step up to emerging-market big leagues
Vietnam says it’s on track to attain the holy grail of emerging-market status, which would put its fledgling capital markets on the radars of the world’s biggest asset managers. Index provider MSCI Inc. isn’t so sure.
Go Back 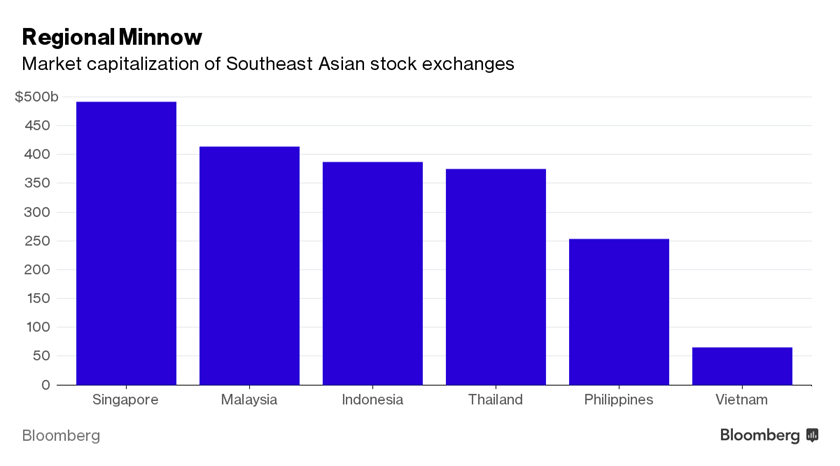 Vietnam says it’s on track to attain the holy grail of emerging-market status, which would put its fledgling capital markets on the radars of the world’s biggest asset managers. Index provider MSCI Inc. isn’t so sure.

All of MSCI’s criteria for emerging-market classification are expected to be met as soon as the end of 2016, Nguyen Son, head of market development at the State Securities Commission, said in an interview in Hanoi. The “most difficult” remaining obstacle is to alter foreign-exchange policy to improve the ease of fund flows, he said. Raman Subramanian, managing director of equity research at MSCI in New York, isn’t convinced, saying the country is not yet on the watch list for emerging-market inclusion.

Vietnam has grown faster than its Southeast Asian neighbors in recent years, but its economy is still dominated by state-owned banks and its stock market is only around a quarter the size of that of the Philippines. The United Arab Emirates and Qatar – the last two countries to be promoted to emerging-market status by New York-based MSCI – saw their benchmark share gauges jump by at least a third in the 12 months following their addition in June 2013.

“If it happens, it will definitely be a real game changer,” said Attila Vajda, the Ho Chi Minh City-based managing director of Project Asia Research & Consulting Pte, a Singapore-based advisory firm. “It will attract a different type of investor: the big guys so to speak.”

Vietnam has a stock market capitalization of $64 billion, compared with $250 billion in the Philippines and $373 billion in Thailand. An emerging-market ranking requires “significant” openness to foreign ownership and ease of capital flows, as well as minimum levels of liquidity and market value, according to MSCI’s website.

“We haven’t heard anybody across the globe telling us that Vietnam should be there, into the emerging-market pool,” said MSCI’s Subramanian. “It’s not even there yet” and needs to go through a whole process to get there, he said.

Certain industries including securities firms were opened up to 100 percent foreign holdings last year. There are another 18 sectors including transport, construction and real estate where offshore investors can take a degree of ownership subject to certain conditions. Some of the country’s many state-owned companies are also proceeding with partial privatization plans. Vietnam Meat Industries Ltd. sold a 14 percent stake to the public in March and Vietnam National Shipping Lines and Mobile Telecom Services Co. are planning initial public offerings later this year.

A merger of the Hanoi and Ho Chi Minh City stock exchanges, which was first announced in 2012, is expected to be completed by early 2017, said the commission’s Son. A composite index will be built and products such as covered warrants as well as a derivatives market will be added in 2017, he said. The government would like to partially float the merged bourse, although this won’t happen until after 2020, said Son. The exchange and bigger listed companies are also publishing more information in English, he said.

Vietnam’s economy will expand 6.7 percent this year, the same pace as in 2015, the government forecasts, although a drought and slumping oil revenue are creating headwinds. Disbursed foreign direct investment surged 17.4 percent to a record $14.5 billion last year, while foreign funds added a net $100 million to their holdings of the nation’s stocks.

Still, the average daily turnover on the Ho Chi Minh City bourse is just 2.26 trillion dong ($101 million), less than a quarter of the amount in Indonesia. A lack of liquidity and limits on foreign ownership of companies need to be improved “markedly” said Project Asia’s Vajda. It’s difficult for a big fund to invest $100 million to $200 million in Vietnam if it wants flexibility of entry and exit, he said.

The VN Indexhas risen 2.5 percent in 2016, trailing gains in Thailand and Indonesia, after advancing 6.1 percent the year before. The commission’s Son said he expected the market to perform better in 2016 than last year due to economic and credit growth as well as a continued increase in foreign direct investment.

“We have met or surpassed some criteria” of MSCI, he said. “I think it’s gonna be a positive year for the market.”