Fuel imports from Korea shoot up
Vietnam had spent US$485 million importing 1.06 million tons of fuels from South Korea in the year to August, up a staggering 573% in volume year-on-year, according to the General Department of Customs.
Go Back 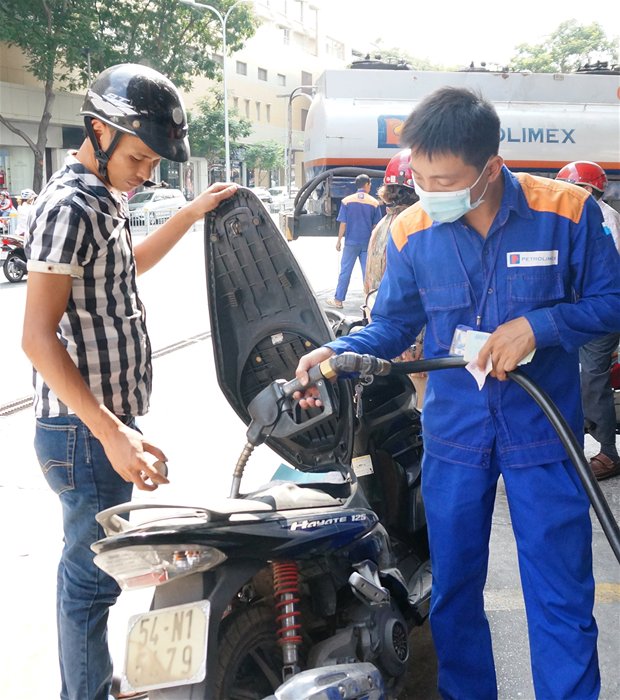 A customer has his motorcycle reﬁlled at a gas station in HCMC. Vietnam had spent US$485 million importing 1.06 million tons of fuels from South Korea in the year to August, up a staggering 573% in volume year-on-year – PHOTO: MINH TAM

In the same period last year, fuel imports from the Northeast Asian market neared 157,700 tons worth more than US$83.5 million.

Statistics of the department showed fuel imports from Korea accounted for 13.3% of Vietnam’s total in the January-August period.

Speaking to the Daily, a fuel wholesaler said domestic companies used to acquire 50% of fuels from foreign nations and the remainder from Dung Quat Oil Refinery in the central province of Quang Ngai. However, it is 70:30 due to lower import taxes.

In recent months, they have stepped up fuel imports from Korea, the company said.

Rising fuel imports from Korea help reduce the base price of fuels, which is the world’s average 30-day price plus taxes and costs.

In the latest round of fuel retail price adjustments, the base price of gasoline dipped three percentage points compared to May-June.

According to data of the General Department of Customs, Vietnam imported 7.96 million tons of fuels valued at US$3.08 billion in January-August, up 23% in volume and 16.3% in value against last year’s same period.

Since 2015, fuels have been imported into Vietnam from markets with preferential import taxes such as Singapore and Malaysia.

A representative of an enterprise told the Daily that the base prices of fuel products like diesel and kerosene were hundreds of dong lower than retail prices last Friday.

Therefore, the retail prices of diesel and kerosene are expected to fall by some VND200 a liter and that of gasoline will remain unchanged at the next round of retail price adjustments today.