Garment, textile exports to expand
The garment and textile sector expects its exports will grow an average of 11.5 per cent per year between now and 2020, the Viet Nam Textile and Apparel Association (Vitas) said last week.
Go Back 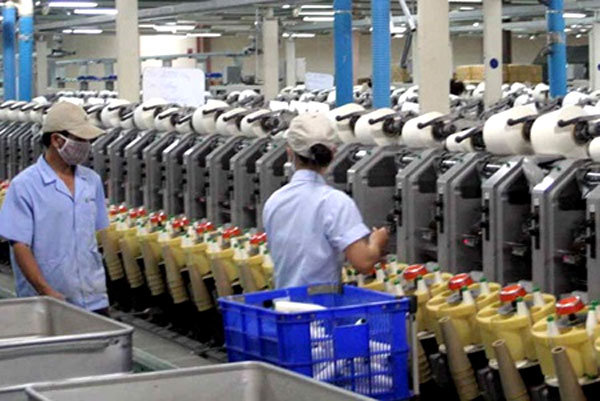 Fibre is manufatured at the Hue Textile Garment Company. The garment and textile sector is expected to generate export revenue of US$27.5 billion this year. — Photo: VNA/VNS

Vitas reports said the sector is expected to generate export revenue of US$27.5 billion this year, and increase this value to $31 billion next year and $45 billion to $50 billion by 2020.

In the first nine months of this year alone, Viet Nam’s garment and textile exports totalled $20 billion, an increase of 10 per cent over the same period last year.

Vu Duc Giang, who was voted chairman of the Vitas at a congress last week, said that global integration will facilitate Vietnamese garment and textile products over the next five years.

“When these pacts take effect, they will boost the development of the garment and textile industry in the long run,” Giang said, adding that accelerating investments in the sector will enhance the value of local products in the global value chain.

Dau tu (Vietnam Investment Review) online cited data of the American Chamber of Commerce, forecasting that after taking into account the impact of the TPP, Viet Nam’s exports to the United States are likely to reach $51.4 billion, with garment and textile products alone touching $15.2 billion by 2020.

The garment and textile exports to this market may hit $20 billion by 2025.

Viet Nam has been among the top 10 garment and textile exporters in the world for the last 10 years. Last year, it ranked fifth after China, Turkey, Bangladesh and India.

The country exports its products to 180 countries and territories, with the United States, the European Union, Japan and South Korea being major markets. It is also exploiting emerging markets such as Russia and Australia.

Many domestic enterprises have reported significant profitability and market expansion, with some officially recognised as national brand names such as Viet Tien, Phong Phu, Nha Be, Garment 10 and An Phuoc.