Gov't aims to lift agricultural exports
HÀ NỘI — The Ministry of Agriculture and Rural Development is seeking to create measures to tackle falling exports of major farm products, to assure it reaches its goal of US$30 billion in export revenues of the agro-forestry-fishery sector for 2016.
Go Back 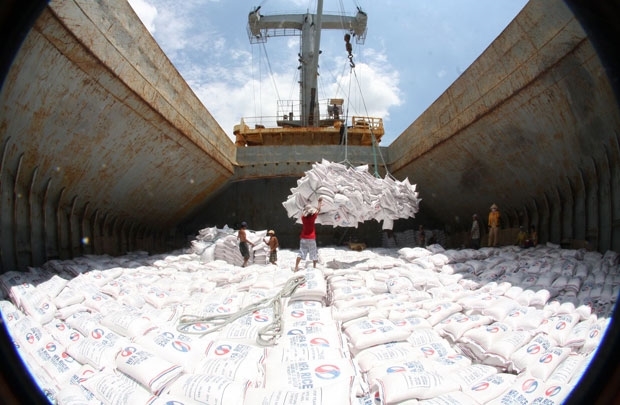 The Ministry of Agriculture and Rural Development is seeking to create measures to tackle falling exports of major farm products, to assure it reaches its goal of US$30 billion in export revenues of the agro-forestry-fishery sector for 2016. — Photo doanhnhansaigon.vn

At a conference held early this week, the Agro-Forestry, Seafood Processing and Salt Industry Department said that prices of agricultural products from the beginning of this year were generally lower than in 2015, amid a slow recovery of the world economy. Droughts, coupled with salt intrusion, also severely impacted agricultural harvests.

Further, the heavy reliance on China for exports of agricultural products continues to be a threat, experts said.

Dương Phương Thảo, deputy director of the Import-Export Department under the Ministry of Industry and Trade (MIT), said that customs figures revealed that exports to China accounted for up to 30 per cent of total revenues.

“Any changes in the purchase policies of China will significantly impact agricultural production of Việt Nam,” Thảo said.

“It is important that the quality of agro-forestry-fishery products be improved,” noted Thảo.

In addition, farmers must be regularly updated with market information.

Regard seafood exports, Trương Đình Hòe, general secretary of the Việt Nam Association of Seafood Exporters and Producers, said that exports of tra fish encountered significant difficulties due to weak market forecasts, resulting in oversupply, which pushed down prices.

Hòe said that the development of a national database about tra fish must be completed by the year end, together with enhancing the quality to ensure sustainable exports.

Agro-forestry-fishery exports in the first seven months of this year touched $17.8 billion, rising by 5.1 per cent over the same period last year.

Rice was among the major farm products that saw significant declines in exports starting at the beginning of this year.

The agriculture ministry’s statistics showed that in the first seven months of 2016, rice exports totaled 2.93 million tonnes, worth $1.32 billion, dropping by 18 per cent in volume and 14 per cent in value over the same period in 2015.

Further, rice exports to China, the largest importer of Vietnamese rice with a share of 35 per cent, saw declines of 23 per cent in volume and 13 per cent in value in the year’s first six months.

Experts said that Việt Nam was at risk of losing its position as the world’s third largest rice exporter.

Bùi Thị Thanh Tâm, general director of the Việt Nam Northern Food Corporation, said that the drop in rice exports was largely due to China’s tightened management of small trade and Việt Nam’s difficulties in finding large contracts with traditional markets, such as the Philippines and Indonesia, coupled with competition from Thais and Cambodian rice.

Tâm added that the Government’s support in removing technical barriers and liberalising trade was needed to boost rice exports.

Vietnamese rice continued to struggle to compete with Thais rice and now Cambodian rice, even in home markets, experts said, adding that building the brand name of Vietnamese rice and enhancing quality had become pressing issues.

At the conference, Nam said that the development of standards for Vietnamese rice must be completed as early as November.

Meanwhile, the MIT is developing a strategy on rice markets for the 2016-20 period, with a vision to 2030, which would aim to bring the value of rice exports to $3 billion by 2017 and $3.5 billion by 2020, with average export volumes of some seven million tonnes per year.

The ministry will focus on expanding quality rice exports to markets which generated high added values, including Taiwan, Hong Kong, Malaysia, Singapore, United Arab Emirates, the US and Australia, while maintaining exports to traditional markets, such as Indonesia, Philippines and China.

The quality of rice would be the top priority to take advantage of opportunities arising from free trade agreements, such as Việt Nam – EU FTA and the Trans-Pacific Partnership, the ministry’s draft said.

Previously, the Prime Minister approved the project to develop the Vietnamese brand by 2020 with a vision to 2050.

Under the project, the recognition of Vietnamese rice was expected to become popular in at least 20 markets, and the national rice brand is to receive intellectual property protection in the form of certified labels in at least 50 markets.