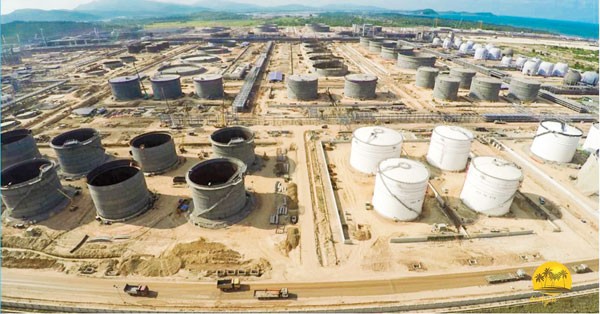 The redundancy of petrochemical products is not only a risk for Nghi Son, but also for Vietnam’s first oil refinery which is operating – Dung Quat Refinery in Quang Ngai Province as its warehouses are about to be fully occupied by inventory products.

One of the refinery projects with the highest committed investment capital in Vietnam is the Nhon Hoi petrochemical project in Binh Dinh Province, central Vietnam.

With capital of $22 billion, the project of PTT Public Company Limited (Thailand) has attracted public attention from the first days. Under the original plan, this giant project would be licensed in June 2015, but this did not happen and the project has not been licensed yet.

While Nghi Son oil refinery is under construction, the Vietnam National Oil and Gas Group (PetroVietnam), which must consume all products of this plant, calculated that once Nghi Son oil refinery operates commercially in 2017 and reaches full capacity in 2018, the total supply will exceed demand of about 821,000 m3, particularly the diesel product will be approximately 849,000 m3 in excess.

Therefore, PetroVietnam said that it is a huge difficulty for the group to ensure consumption of all products of Nghi Son oil refinery.

The group has asked the Government Office, the Ministry of Finance, and the Ministry of Industry and Trade to only grant import quotas after ensuring that all products of domestic refineries as Dung Quat and Nghi Son are consumed totally in order to ensure the effectiveness of these projects and to ensure energy security.

The redundancy of petrochemical products is not only a risk for Nghi Son, but also for Vietnam’s first oil refinery which is operating – Dung Quat Refinery in Quang Ngai Province as its warehouses are about to be fully occupied by inventory products. According to PetroVietnam, the current import duty rates for products of Dung Quat oil refinery are still higher than the special preferential tax rates in the free trade agreements.

According to calculations by PetroVietnam, assuming that in the second half of December if clients do not receive goods as schedule, the inventory volume of Dung Quat will be about 190,000 m3, exceeding the maximum capacity of its warehouses of 150,000 m3 for diesel oil.

In this situation, PetroVietnam has asked the Government to consider reducing import duty on diesel oil to 7% for the last months of 2015.

Dr. Ngo Minh Hai, Vice Chairman of the Enterprise Forum Club of the Central Institute for Economic Management, said that incentives and support for refinery projects should be carefully considered to avoid the current situation, when refinery plants had to call for the government’s assistance to sell their products.

Dung Quat is the first refinery in Vietnam, a breakthrough for economic development in Central Vietnam in particular and in the country in general. Therefore, the government gave a lot of privileges to this project. However, as more and more oil refinery projects to be built in Vietnam, the preferential policies should be tightened, he said.

Dr. Hai said it is a problem when oil refinery plants like Dung Quat ask for additional incentives.

Prof. Nguyen Mai, chairman of the Association of Foreign-invested Enterprises, emphasized that the Vietnamese Government should be cautious in developing the petrochemical industry and should dedicate land and human resources to the development of future industries such as electronics and microbiology rather than oil refineries.

Dr. Luu Bich Ho, former Director of the Institute of Strategy Development, also said that the longer incentives for Dung Quat refinery are maintained, the poorer the competitiveness of Dung Quat will be.

“The incentives for other refineries should also be reviewed and they must be based on international practices and commitments,” he added.

The policy of building more refineries is inconsistent with the strategy of industrialization, modernization and international integration, Dr. Ho said.