HCMC allows massive tourism project near biosphere reserve to expand: report
The complex of hotels, resorts and a shopping mall has received permission to eat into the sea despite environmental concerns
Go Back 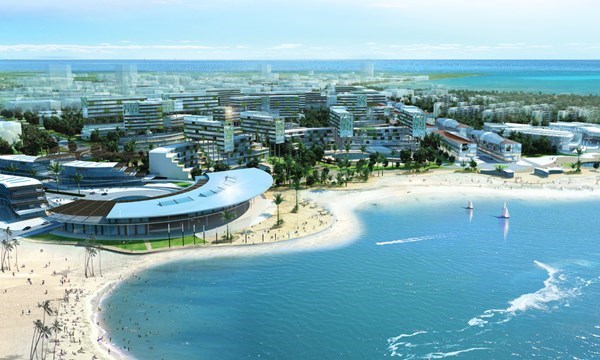 A tourism project near a treasured biosphere reserve on the outskirts of Ho Chi Minh City has been allowed to encroach on 1,080 hectares of sea area, news website Saigon Times Online reported on Tuesday.

Can Gio Tourist City Corporation will conduct a feasibility study for the tourism complex, known as Saigon Sunbay, and submit its revised design to the city’s government next month, it said.

Originally the project only planned to take over 600 hectares of the sea.

The investor has been ordered to create plans and make sure the construction of transport infrastructure will not affect the biosphere reserve in Can Gio District, which has been recognized by UNESCO.

First announced 15 years ago with a projected cost of around VND8.47 trillion (US$374.61 million), Saigon Sunbay was set to have construction work begin in 2007.
But it was soon delayed due to financial reasons.

The project was resumed in June, after the city named real estate giant Vingroup as its “strategic investor.” The project is now expected it to be completed in 2022, Saigon Times reported.

According to the initial plan, Saigon Sunbay would consist of hi-end hotels and resorts, along with an international convention center, a shopping mall, and an aquarium. It would also have wharfs for cruises and seaplanes as well as a helicopter pad.

Its investor planned to assign about one third of the designated area for an artificial bay with its beach made from white sand brought in from central Vietnam.

Dubbed “the green lung” of Ho Chi Minh City, Can Gio boasts more than 70,000 hectares of mangrove forests, and rivers and canals, and around 200 different species of wildlife and 150 species of flora. Half of its area was recognized as a world biosphere reserve by UNESCO in 2000.

Experts have warned that tourist projects near the reserve could disturb it and cause irreparable damage.