HCMC offers incentive for Samsung project
HCMC – The HCMC People’s Council at the closing of its session last Friday decided to provide an additional tax incentive for an expansion plan of the Samsung Electronics HCMC CE Complex at the Saigon Hi-Tech Park.
Go Back 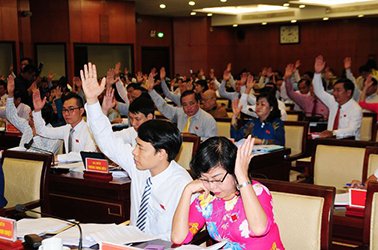 Council members at the meeting approved Resolution No.9 on extra incentive for the electronics products and household appliances complex in District 9 as investor Samsung Electronics revised up capital from US$1.4 billion to US$2 billion last year, just one year after it got an investment certificate.

The city’s budget will cover 50% of the corporate income tax for Samsung after the South Korean firm makes full tax payments for the city. This tax incentive will be valid for three consecutive years, probably starting from 2030, after the company pays the tax for nine years.

Also at the meeting last Friday the council approved a project to upgrade the left bank of the Saigon River from Cau Ngang Canal to Thu Thiem New Urban Area at a cost of nearly VND993 billion. Of the amount, the city’s budget will account for VND404 billion and the State budget for VND588 billion.

The project is aimed at protecting 1,600 hectares of land in Truong Tho Ward of Thu Duc District, and An Phu and Thao Dien wards of District 2, with around 25,000 residents benefiting.

The council also agreed on capital increases for the Thang Long bridge project from VND91 billion to VND450 billion and the upgrade of Nguyen Thi Dinh Street’s road section between My Thuy intersection and Cat Lai ferry terminal from VND645 billion to around VND1.15 trillion.

In addition, the council passed investment guidelines for five other public investment projects in Group B worth a combined VND718 billion.

The council approved socio-economic, budget, security and defense development targets for the 2016-2020 period. Accordingly, annual gross regional domestic product (GRDP) growth in the five-year period would be 8-8.5% and the city economy would be restructured in a way that centers on services, industry, construction, agriculture and seafood with the services sector accounting for 56-58% of GRDP by 2020.